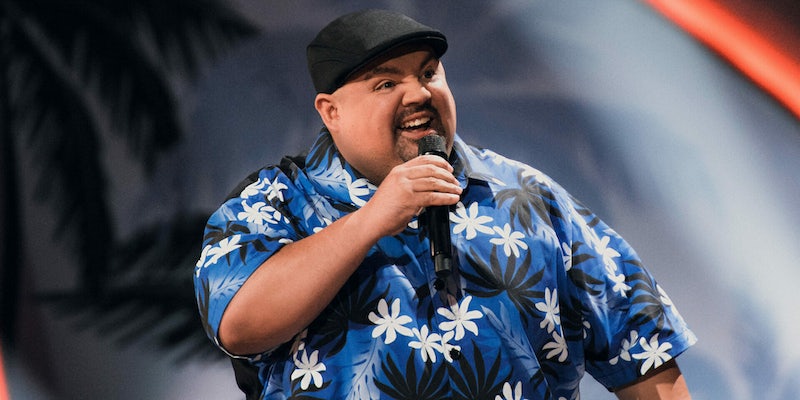 Gabriel Iglesias gets sentimental in ‘One Show Fits All’

'Fluffy' has created an impressive sense of community between himself and his fans.

Gabriel Iglesias is one of the most likable comedians in the business. He does funny voices and tells relatable jokes. What’s not to love? In his latest Netflix special, Gabriel “Fluffy” Iglesias: One Show Fits All, Iglesias delivers a set anyone can enjoy. For as much amusement as the audience gets, though, perhaps no one is enjoying the moment more than Fluffy himself.

One Show Fits All plays like a victory lap for Iglesias. But the 42-year-old comic isn’t interested in basking in his success as much as sharing the moment with fans. The sense of community between Fluffy and his fans is apparent right off the bat. Whether you’re a longtime fan or a casual observer like me, you immediately feel like you’re in the company of friends.

Filmed in Houston one year after Hurricane Harvey, One Show Fits All kicks off with Iglesias detailing his own history with the city. It’s a cool trip down memory lane that also functions as some warm-up crowd work. The set properly starts with a bit about Iglesias’ 19-year-old son, Frankie, which includes several dad jokes and a story about catching his son watching porn. The set moves along quickly, with amusing stories about Iglesias meeting Snoop Dogg and Chris Rock. The comedian’s glee is infectious, and he makes the audience feel like co-conspirators, sharing in the absurdity of his success.

The first half of One Show Fits All is fairly light and easy-going, but it’s the second half that makes the show special. The material turns more introspective and sentimental, as Iglesias talks about his longtime bus driver Dave, a white guy who embodies ‘Murica. Iglesias doesn’t get too political and instead uses the moment to talk about putting our differences aside. It’s a nice, if benign, message for a hostile time. That’s about as political as the show gets, which is fine. Iglesias just wants everyone to have a good time, and the jokes never rise above friendly chop-busting.

The heart of the show comes when Iglesias tells the story behind the last photo taken of his mother. It’s a touching tribute and a lovely story; I won’t spoil the specifics here because it deserves to be experienced fresh. He follows this up by recounting the beginning of his career, highlighting his first two fans (who are in the crowd) and repeating some of his earliest jokes. The audience recites and finishes the jokes as if they were singing alongside their favorite band. The “look what we’ve done” sentiment is sincere, and the mutual appreciation between Fluffy and his crowd is palpable.

One Show Fits All is a reflective, fun special that is accessible to all. I can’t imagine someone not enjoying it. It’s not always laugh-out-loud funny, but Iglesias, who smiles through most of the show’s 90 minutes, is such a warm person you just want to spend time with him.