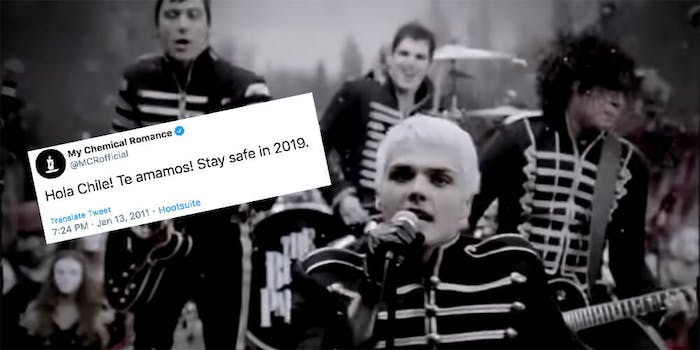 My Chemical Romance may have predicted Chilean uprising back in 2011

The internet is full of unexplainable coincidences and conspiracies. Twitter found yet another one linking rock band My Chemical Romance to the current political state in Chile.

Twitter users dredged up an old tweet from My Chemical Romance that may have predicted the violent protests currently taking place in Chile.

The tweet resurfaced recently and has been making its rounds on the platform. “Did my chemical romance predict Chile’s current political state 8 years ago…? bitch wtf,” Twitter user @meechie_I wrote on Nov. 3.

Under the My Chemical Romance’s 2011 tweet, users are expressing their shock over the correct prediction.

Chileans began rioting against the government in October of 2019 in response to a hike in metro costs. Even though the rate hikes catalyzed the movement, the protesters are rioting the overall economic gap, such as unequal access to education and healthcare, that exists in Chile, according to Vice.

10,500 soldiers and police officers are roaming the streets in Santiago, Chile as a state of emergency and curfew remained in effect for six Chilean cities, but protests continue. Piñera cancelled moves that sparked the protests but it has done little.
>1,500 arrested pic.twitter.com/2PLa96rnno