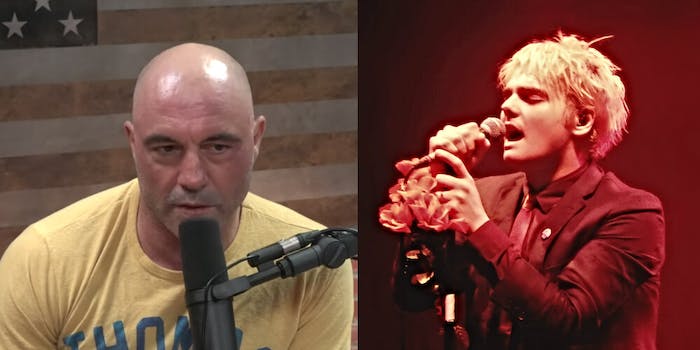 Despite being in the same family, Rogan says he and Way don’t know each other.

Rogan confirmed the familial tie on his podcast with actor Kevin Smith.

“I’ve gotta ask a question on behalf of somebody else,” Smith says, looking up at Rogan after each question. “Your grandmother? Named Josie? Gerard Way? Lead singer of My Chemical Romance?”

Despite being in the same family, Rogan says he and Way don’t know each other.

According to Loudwire, Smith was on the podcast to promote his movie, Jay and Silent Bob Reboot. Loudwire reports that Smith is also planning the release of Clerk’s 3—and there are talks of it being scored by Way.

In Smith’s telling, when he told Way he was going on Rogan’s podcast, the singer and genius behind the Netflix original Umbrella Academy said, “I don’t have 100% confirmation on this, but I’m pretty sure Joe Rogan is my cousin because my Aunt Josie was his grandmother.”

To bring this full circle, there are now talks of Rogan bringing Way on his podcast—or at least Smith is urging that to happen.

Rogan, for his part, doesn’t seem opposed to the idea, either.

@joerogan Please Interview your Cousin @gerardway I THINK ITS TIME FOR YOU DUDES TO KNOW EACH OTHER!

Still, the Twitter-verse didn’t seem stoked about the news.

“It is with immense displeasure and apologies to every Gerard Way loving emo girl on my TL tonight that I must report: Joe Rogan is Gerard Way’s cousin,” Twitter user @aquaticcoward wrote.

I just found out @joerogan is related to @gerardway…what in the actual fuck.