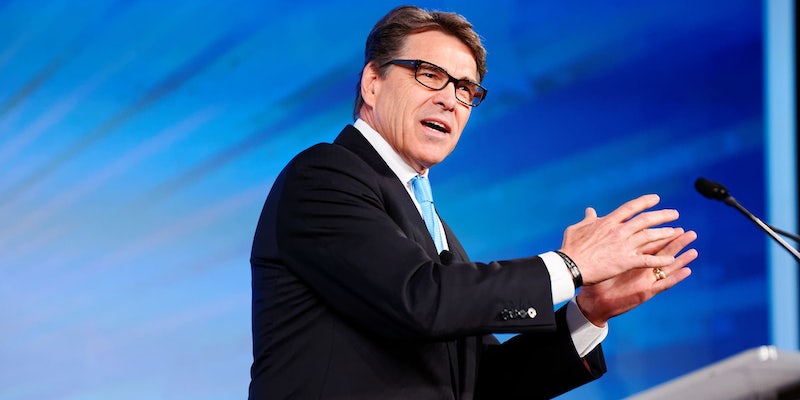 He has the gift.

Just narrowly edging out big lying Olympics boy Ryan Lochte as the worst person to join season 23 of Dancing With the Stars is former Texas Gov. Rick Perry, most famous for standing firmly against women’s healthcare and LGBT rights and once not being able to remember a third thing. America didn’t want him as president, but maybe they’ll like his rumba!

I’m dedicated to helping #veterans however possible, and I’m going to use @dancingabc as a stage to do that. #DWTS pic.twitter.com/oQpfJrrYcC

My @dancingabc partner, @EmmaSlaterDance, is a great teacher but she’s got her work cut out for her. #DWTS pic.twitter.com/vmusTqXXCe

Perry can spin this awkward and ignominious slide from the political spotlight into reality show hell however he likes—seriously, he couldn’t even get on The Apprentice?—but what’s even funnier is that everyone saw it coming. Of course, some people saw it more clearly than others.

Can’t wait till Rick Perry does Dancing With The Stars

To go by Emma Slater’s pained smile, Perry’s performance is virtually guaranteed to be a disaster, but it’ll be roses compared to whatever he ends up doing next. So do stay tuned for Bobic’s next clairvoyant vision, and then, well, you’ll just have to have a little patience.