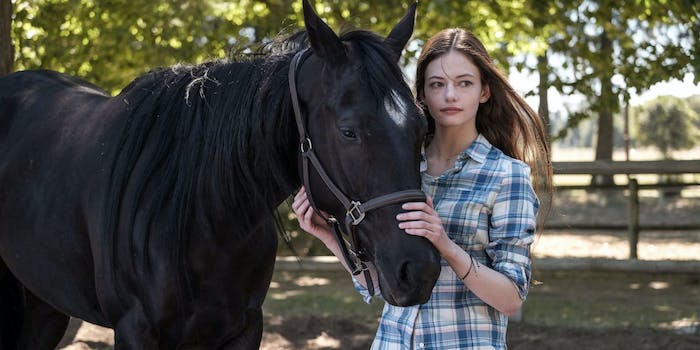 How to stream ‘Black Beauty’

A modern adaptation of the literary classic.

If you attended elementary school in America, there’s got to be like a one in five chance you read the novel Black Beauty by Anna Sewell. Perhaps because it’s a literary classic. The classic tale about a teenage girl’s bond with a special horse is getting a modern re-imagining, with Disney’s Black Beauty.

The story follows the eponymous horse, a wild equine born free in the American West. After being rounded up and taken away from her family, she meets an equally strong-willed teen girl in Jo Green. Together, they form an unbreakable bond that carries Beauty through countless hurdles and adventures in her life.

Here’s everything you need to know to stream Black Beauty.

How to stream Black Beauty

Black Beauty is available exclusively on Disney Plus.

Disney+ offers one of the most beloved libraries of streaming content online. Namely, 500 Walt Disney Studios movies and 7,000 episodes of Walt Disney Television. It also includes selections from Pixar, Marvel, Star Wars, and National Geographic. They’re all members of the Disney family, after all. There are also 30 seasons of The Simpsons. Like any streaming service worth its salt, there are exclusive original productions including Lady and the Tramp, Wandvision, Monsters at Work, and The Mandalorian. One subscription works on up to four devices. You can even download content directly to your device to watch anytime. Plus, it’s the only place you can stream Black Beauty.