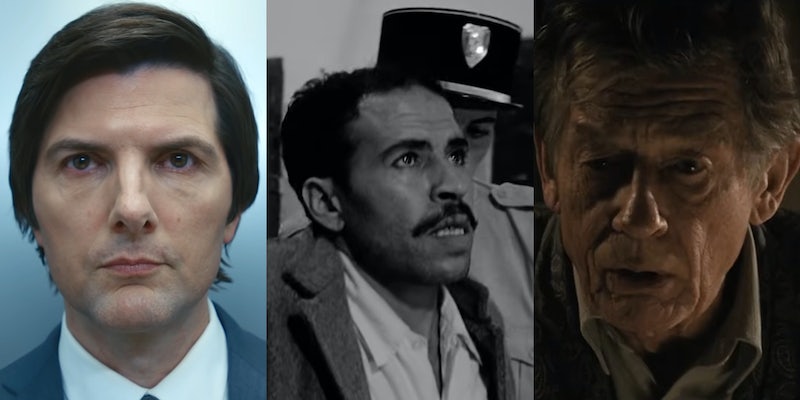 What to watch next if you love ‘Andor’: Political thrillers, dystopian dramas, and more

In a landscape of formulaic franchise spinoffs, Andor is a shock to the system: An ambitious political thriller with a sharper, more mature view of the Star Wars universe. It’s startlingly radical for a show airing on Disney+.

As season 1 draws to a close, Andor leaves a gap in our viewing schedules. Hopefully, some of these recommendations will help. Rather than being your typical Star Wars-adjacent choices, these movies (and one TV show) overlap with Andor’s deeper themes, from Cold War paranoia to anti-colonial warfare to the restrictive torments of life under capitalism.

Covering the urban warfare between Algerian freedom fighters and the French colonial government in North Africa, this groundbreaking war drama came out just four years after Algerian independence was declared. It recreates true events with such meticulous authenticity that some viewers assumed it reused old newsreel footage. (On a related note, it actually does star several people who fought in the revolution, including independence fighter-turned-senator Saadi Yacef.)

Centering on the young revolutionary Ali La Pointe (Brahim Haggiag), The Battle of Algiers offers a street-level view of life in 1960s Algiers, from deeply personal moments to massive crowd scenes and urban violence. We’re introduced to the city and the people who live there, witnessing the brutal tactics employed by both the French occupiers and the Algerian revolutionaries trying to expel them.

Widely lauded as one of the greatest war movies ever made, this is essential viewing for anyone with an interest in Andor’s political worldbuilding, giving real historical context to the show’s portrayal of guerrilla warfare.

Streaming on HBO Max, the Criterion Channel, and Kanopy.

Novelist John le Carré was the father of modern spy fiction, best known for his intricately-plotted Cold War thrillers—which were partly inspired by his own experiences working for British military intelligence and MI6. Adapted from le Carré’s most famous novel, Tomas Alfredson’s Tinker Tailor Soldier Spy is a masterpiece of the genre, delving into a paranoid game of cat and mouse between cynical British agents.

The resulting investigation makes for an enticing mystery, but beyond that, this is one of those movies that just gets everything right, from costumes and cinematography to the extremely specific psychology and class politics of British Cold War spies.

Available to buy/rent on VOD.

Arriving hot on the heels of the Blaxploitation boom of the early 1970s, this satirical thriller was suppressed by the FBI due to its enthusiastic depiction of Black militancy in the Civil Rights movement.

After directing the crime thriller Trouble Man in 1972, actor-turned-director Ivan Dixon shifted into more radical territory with a story about a Black freedom-fighter infiltrating the CIA. The early scenes of the film show the CIA deciding to recruit a token Black agent as a publicity stunt, selecting a man named Dan Freeman (Lawrence Cook), who is clearly only hired to make the CIA look more diverse.

The twist is that Dan Freeman is secretly a Black nationalist, using his new job to learn CIA tactics that he can teach to his fellow revolutionaries. What happens next is both entertaining and astonishingly bold for American cinema – not just “for its time” but even today, endorsing a hero who wants to overthrow the US government.

Likely to appear on many best-of-the-year lists, this TV drama is based on a new technology that separates people into two personalities. Their “innie” only exists in the workplace, while their “outtie” gets to live in the outside world, enjoying their family and hobbies. Both personas share the same body, with no memory of each other’s experiences.

From the outtie’s perspective, it’s a fantastic deal. They never have to go to work! Meanwhile, the innie is trapped in a life of constant (and effectively unpaid) labor, with no hope of escape.

Adam Scott plays a man working for Lumen Industries, a bland corporation whose real purpose is entirely unclear. As an “innie,” his entire life takes place inside a basement office with a handful of other severed workers. It’s a potent sci-fi conceit, working on both literal and metaphorical levels to explore some disturbing ideas about how capitalism warps our lives and values.

Although Severance focuses on a white-collar workplace, it has a lot in common with Andor’s prison sequence. Along with being a very effective psychological thriller and anti-capitalist critique, it’s also a brilliant workplace drama, utilizing actors like Christopher Walken and Patricia Arquette in satisfying and unexpected ways.

Andor showrunner Tony Gilroy has enjoyed a long and varied career, best known for writing the Bourne movies, and for writing and directing the widely-acclaimed legal thriller Michael Clayton.

In what is arguably a career-best role, George Clooney plays the title character here: a fixer for a corporate law firm, tidying up the messes of wealthy clients. One such mess is connected to a massive class-action lawsuit involving carcinogenic weed killer, pitting a group of farmers against a massive agricultural conglomerate led by executive Karen Crowder (Tilda Swinton, in an Oscar-winning performance).

While Michael Clayton is in some ways a pretty conventional kind of legal/corporate thriller, it’s a pitch-perfect example of the genre. It’s also very easy to see the thematic through-line from here to Andor, including Gilroy’s interest in corporate cruelty, and the highly specific circumstances that inspire morally-grey people to do the right thing.

Streaming on Tubi and available to buy/rent on VOD.