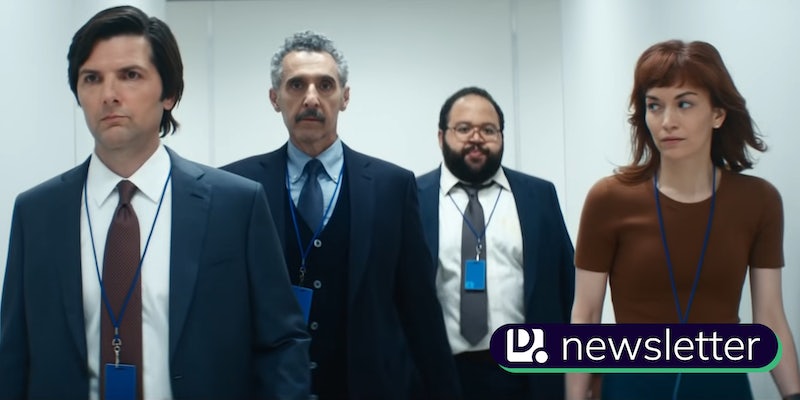 In today's Internet Insider newsletter, we have our weekly 'Now Streaming' column.

Hello fellow citizens of the internet! Ramon here, filling in for Andrew once more this week. Welcome to today’s edition of Internet Insider.

Here Audra breaks down sleeper hit Severance, which has bred a cult of obsessive fans. Just read about it for the first time while loading her story and dang, I’ve gotta watch this show!

Speaking of top-tier recent works of art, as a special newsletter exclusive and my gift to you, I’ve cut the new Machine Gun Kelly album into a “machete” edit that disposes with the misfires (about high school, celebrity malaise) and offers what I believe to be the best record that Travis Barker has ever drummed on. MGK’s Mainstream Sellout is an instant pop-punk classic, rich with tenderness, interiority, and crossover genre highs that land. Give it a listen!

Let’s get to the news.

‘SHATTERED’: Artist and model Mei Yue has accused Russian artist Angelina Poveteva of using a photograph taken of Yue as the basis for her award-winning nude painting “Time to open your eyes,” all without permission, credit, or any kind of compensation.

NEVER LET THEM KNOW YOUR NEXT MOVE: It’s always exciting to watch something and be met with the unexpected, but TikTok is taking it to exciting and visually arresting levels with a new trend.

‘NEW FEAR UNLOCKED’: A woman on TikTok claims she was set up to be robbed while renting a home for a bachelorette party in Austin, Texas… and that her Vrbo listing went dark as soon as she arrived.

The defiant jazz of ‘Severance’

Apple TV+’s Severance is a puzzle show, a mystery to solve, which of course produced fan theories on Twitter and Reddit, though not on the level of Yellowjackets. The show has been something of a sleeper hit and it’s been a while since I actually got thoroughly obsessed with fan theories, which stars Adam Scott and Patricia Arquette have been discussing on Twitter. Severance rewards your patience with jolts of “Oh shiiiiit!”

Mark Scout (Scott) heads the Macrodata Refinement team at Lumon Industries. He and his co-workers don’t know exactly what it is they do there, or what happens after they leave the office: They’ve all had a severance procedure so that their consciousness is split between personal and professional life, creating an “innie” and an “outie.” Scott is excellent here—he did predict the premise of Severance back on Parks and Rec, after all—but the show is truly an ensemble package: Helly (Britt Lower), the newest “hire,” joins Dylan (Zach Cherry) and Irving (a sublime John Turturro) in their four-person pod.

Lumon’s office design is truly a feat. It’s mid-century, though we never quite know when these events are taking place. It seems like the present but there are flip phones and vintage cars and computers. When Helly wakes up on a conference table in episode 1, showrunner and writer Dan Erickson told Vulture the table was meant to be “the womb.” The dolly zoom shots in one episode subtly convey when they transition from outie to innie.

The series, which concludes its first season on Friday, has been compared to Westworld (perhaps it’s the opening sequence) but I saw more parallels with Enlightened, at least in terms of the windowless subterranean prison its employees toil away in, unsure of what they actually do down there, and the loneliness and despair of the American workplace.

Among the recent glut of mediocre shows about (real) bad bosses and founders, Severance stands out for its incisive writing and structural integrity. And for making me crave deviled eggs.

The savings add up with Walmart+

What would you do with more time and money? Walmart+ promises to help you save time and money with free unlimited grocery deliveries, discounts on gas and prescriptions, mobile scan-and-go shopping, and other perks. Start your 30-day free trial to see how much time and money you can save.

She says her roommate has gone up to a week without feeding the animals.

“Wasn’t the first time the owners closed and left it a mess but got on the employees to always give 100%.”

These are the stab-happy lunatics terrorizing a group of teens near you.*

The video sparked debate about the legal ramifications of allowing minors to rent properties on the platform.

Why are people on TikTok awkwardly zooming in on their faces? Madonna.