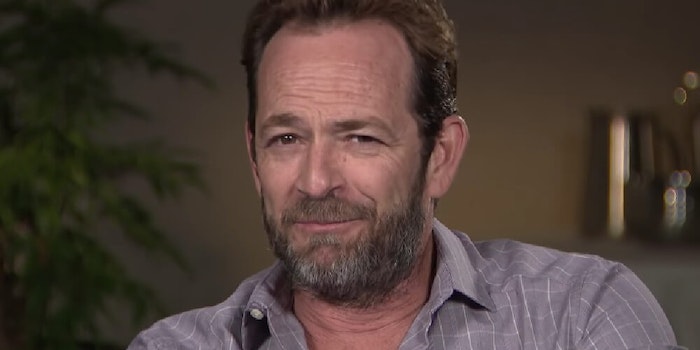 His last film was nominated for best picture.

The Oscars‘ annual “In Memoriam” upset many fans on Sunday night after the segment left out big-name stars like actor Luke Perry.

The star, who most recently had a role in Once Upon a Time In Hollywood, died in March after having a stroke. He was also well known for his long stint as Dylan McKay in Beverly Hills, 90210.

The “In Memoriam” segment honors “the many talents we lost during the previous year, the lives they touched, and the art they made or made possible.”

Perry was one of 163 people who were acknowledged online at the Oscars’ website. But fans say that given his long acting career and his most recent role in a film nominated for best picture, the Oscars made a serious oversight.

”Shame on the academy for not including Luke Perry in the ‘in memoriam’ tribute, seeing as Once Upon A Time In Hollywood was the last film he made before he passed AND it was up for best picture,” Twitter user @jenjkel

Wait a minute? Let me see if I'm understanding this…the Oscars had a memoriam and somehow Luke Perry was excluded despite that he's in one of the nominated films?! pic.twitter.com/3nth2skJHp

Excluding Luke Perry from the Oscars in Memoriam was disrespectful. He appeared in Once Upon a Time in Hollywood which was nominated for Best Picture. Quentin Tarantino personally selected Luke to be in his movie so why not mention him? #oscars pic.twitter.com/eRICigXD0N

The outrage led to Perry’s name trending on Twitter until Monday morning. During that time, it became a top-10 Twitter trend in the U.S., according to Trends24.

But Perry wasn’t the only actor left out of the memorialized. Fans are also upset that–among others–Cameron Boyce, Sid Haig, Rob Leibman, and Denise Nickerson were also not included.

“Are you kidding me? Luke Perry was IN one of the films NOMINATED, Sid Haig is a literal ICON in the horror genre, and Cameron Boyce was one of the biggest stars to come out of Disney in the last 10 years,” Twitter user @theharassdrop wrote.

are you kidding me? Luke Perry was IN one of the films NOMINATED, Sid Haig is a literal ICON in the horror genre, and Cameron Boyce was one of the biggest stars to come out of Disney in the last 10 years. https://t.co/pMG7vOafaO

Sid Haig was an absolute legend. A wonderful actor and a beautiful human being.

For him to be blatantly ignored by 'The Academy' for their In Memoriam section is an absolute disgrace .

And this also goes to Luke Perry and Cameron Boyce . pic.twitter.com/WfgYHkT4lM