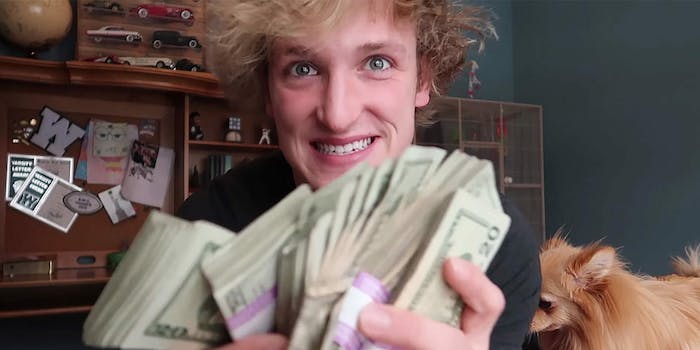 Despite his YouTube controversies, Logan Paul made a ton of money this year

Here's how much he earned.

Despite all of his YouTube controversies, Logan Paul is still a giant earner on the platform, making $14.5 million in 2018, according to Forbes. That’s good enough to make him the 10th-highest earner among all YouTubers, barely behind No. 9 PewDiePie.

There is a caveat, however.

Forbes measured his earnings from June 1, 2017, to June 1, 2018. Paul posted his mega-controversial Japanese suicide forest video that showed a dead body hanging from a tree at the very end of December 2017. Following that international outcry, YouTube removed him from the Google Preferred program, temporarily halted all of his ad revenue, and stopped some of his other original projects with the social media platform.

Paul estimated he lost $5 million from the controversial video and all the consequences he suffered as a result.

“Surprisingly, Paul still earned the majority of [his $14.5 million] income from YouTube ads,” Forbes wrote. “That’s because six months of our scoring period came prior to the ill-fated video; in that time, he scored an estimated 2.55 billion views from his daily vlogs, a giant increase over the year prior. While his viewership dipped to 630 million views in the five months after January, those billions of views nabbed him seven figures in advertising money.”

Paul also earned plenty less than his brother Jake Paul, who made $21.5 million for 2018 and who was the second-richest earner for YouTube. The richest? Ryan ToysReview, the 7-year-old who earned a whopping $22 million.

That led Jake Paul to this reaction:

After a tumultuous first half of 2018, Logan Paul seems to have steadied himself—relatively speaking, of course. He likely made plenty of money from his boxing match with KSI in August, he started a new podcast called Impaulsive, and YouTube ended up releasing an original movie that he stars in but that had been temporarily shelved following the Japanese suicide forest video.

But there have been other hiccups. Jake Paul described how devasted he was by Logan’s apparent romantic betrayal, and Logan claimed he is now a Flat Earther (though he’s probably only saying that for attention).

One thing, though, remains certain. No matter the controversy he’s put himself and the entire platform through, no matter how much people might despise him, Logan Paul knows how to grab attention—and it still makes him one of the most successful, and richest, YouTubers on the planet.