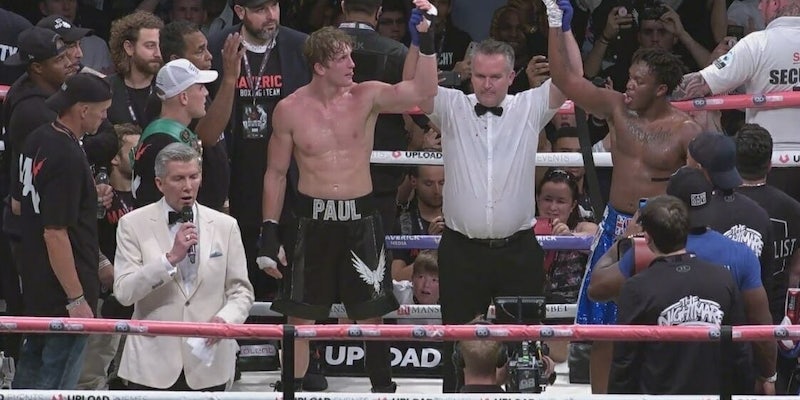 KSI nearly knocks out Logan Paul, but the judges score it a dissatisfying draw

Expect a rematch next year.

Although KSI nearly knocked out Logan Paul in the sixth and final round, the judges deemed the YouTube boxing extravaganza a majority draw, setting up a rematch for next year in the U.S.

“I think it’s what the people want,” Paul said. “Let’s give them a motherfucking rematch.”

With as many as 800,000 users paying $10 to watch the fight on YouTube (and with hundreds of thousands reportedly watching for free on Twitch) and with the #KSIvsLogan hashtag trending No. 1 in the world, the two gave a solid accounting of themselves.

Before the fight began, as they were listening to the referee’s instructions, KSI blew kisses at Paul. But Paul blasted KSI throughout the first round, landing at least six hard punches to KSI’s face. Paul was so confident in the first round that he dropped his hands and stuck out his chin. He spent some of his time simply taunting KSI. Early on, KSI couldn’t take advantage.

Logan Paul did a great job of using his height and reach advantages in the first two rounds. But in the third round, KSI landed a plethora of right hands, and by the end of the fourth round, Paul was clearly exhausted. But he rallied in the fifth and seemed to briefly stun KSI with a combination. In the sixth round, though, a weary Paul nearly was knocked out as KSI winged shots at him.

Both fighters claimed victory in the aftermath, but then again, neither seemed all that upset that they were given a draw.

The buildup to this fight had been filled with drama. Much like the Jake Paul-Deji feud, which ended on Saturday’s undercard when Paul knocked out Deji in the fifth round, this started when KSI called out the Paul brothers after he knocked out Joe Weller in February.

From there, Logan Paul and KSI traded plenty of insults, KSI attacked Paul at a press conference, and Paul said KSI had sexually objectified his girlfriend, Chloe Bennet. KSI, for what it’s worth, wore a Chloe Bennet mask on his face when he weighed in on Friday.

Now, the first fight is over. And whether you like it or not, there’ll be many more months of trash-talking between these two YouTubers in preparation for the next.