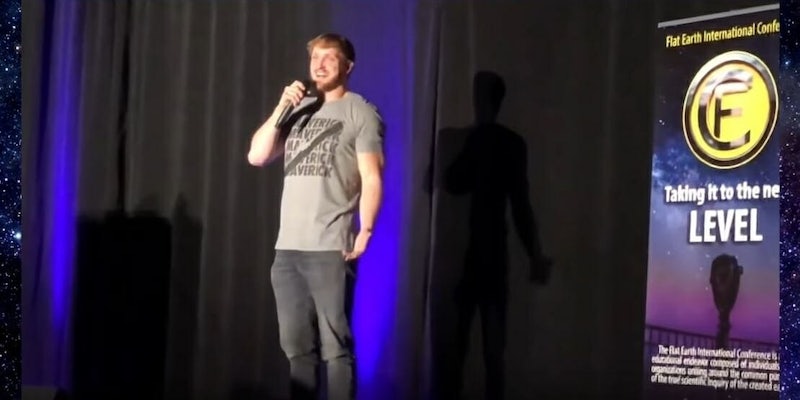 Is Logan Paul seriously a flat-earther?

Logan Paul might have just given yet another reason for people to think he’s a fool—or, perhaps even worse, that he’s ungenuine.

The YouTube star appeared as a surprise guest at a Flat Earth convention late last week. Paul, in a speech, said he believed the Earth was flat, joining the likes of basketball star Kyrie Irving and rapper B.o.B. in publicly believing the centuries-old fallacy (and newfound conspiracy theory) that this world is not actually shaped like a globe.

“I consider myself a man of truth, someone who hates being ignorant,” said Paul, who is still trying to recover his reputation for posting video of a dead body in a Japanese “suicide forest” at the end of 2017. “I try my best to avoid being ignorant. That’s why I decided to come here … If I’m going to put my name out there, I want to know the facts.”

Paul then discussed how humankind hasn’t explored the moon in decades and how supposed “globe heads”—the derisive name used by flat-earthers to describe people who don’t share their views—can’t explain gravity.

Paul said, “I guess, I guess, I’m not ashamed to say: My name is Logan Paul, and I think I’m coming out of the flat-earth closet.”

That was met with a literal mic-drop and plenty of laughter and applause from the crowd.

Afterward, the conference’s organizer, Robbie Davidson, exclaimed that Paul could be a way to make their movement more legitimate. “This is the first step: Someone with a very big following putting their name on the line and saying, ‘You know what, I’m almost there. There’s a lot of compelling evidence,’” he said.

But the Daily Beast interviewed Paul and came away skeptical. Author Kelly Weill wrote, “I can say this with confidence: Logan Paul does not believe the Earth is flat. … ‘To me, it’s just so obvious that obviously, the Earth is flat obviously,’ Paul [said]. It’s his second attempt at the speech. The first time through, he had to stop for a laugh break.”

Paul apparently also was filming a vlog for his own channel at the convention, which might explain why he’s taking this stance. YouTube star Keemstar opined that Paul was doing this because either he’s trolling or because his popularity is waning. As YouTube’s gossip king pointed out, Paul’s last video currently has 1.4 million views (for context, it’s his worst performing video in recent memory).

“It’s kinda common knowledge that most of Logan’s fans are … how do I say this … stupid,” Keemstar said. “So, he’s seeking more idiots to follow him.”

In the recent Shane Dawson documentary on Logan’s younger brother, Jake Paul revealed that he was devastated by Logan’s betrayal with former girlfriend Alissa Violet. So, perhaps Logan Paul is trying to change the conversation. Maybe it’s better to be thought of as ignorant than a sociopath.

Others are worried about Paul’s young audience and the impact of Paul’s new views.

Normally I’d agree but his audience is mostly impressionable children. I think it’s irresponsible to feed them flat earth nonsense

At this point, it’s unclear what Paul believes. But as the Daily Beast wrote, it seems that, like much of everything in Paul’s YouTube life, this might not be entirely true. After Paul’s explanation during his interview, between fits of laughter, on why he believes in a flat earth, one of his buddies said, “That was really solid. That was more compelling than the first time, I think.”