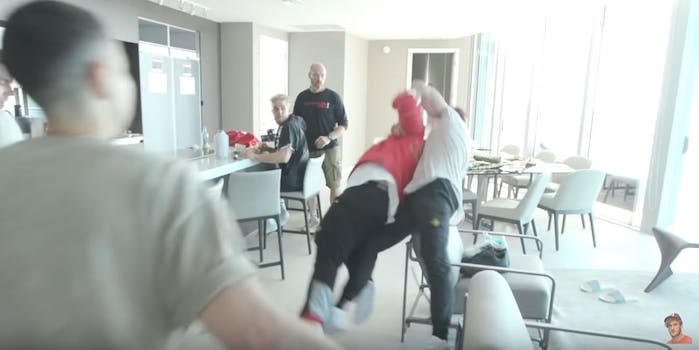 Logan Paul is apparently eyeing a boxing match with former NFL receiver Antonio Brown. But first, he took on one of Jake Paul’s best friends last week, and Logan Paul made sure the fisticuffs ended rather quickly.

Logan Paul uploaded a YouTube vlog on Monday, showing footage of him defending one of his cameramen after Arman “Armani” Izadi, considered to be Jake Paul’s right-hand man, attacked him in a Miami hotel room the day of Jake Paul’s first-round knockout of AnEsonGib.

First, let’s assume this is all real, though in the world of YouTube and the YouTubers who create fake storylines all the time, that can’t be 100% verified.

As Logan Paul’s video shows, Izadi grew upset the morning of the fight because Jake Paul’s breakfast was an hour late in arriving. He scuffled with another member of Jake Paul’s camp in the entryway to their hotel room, and as he was pulled away, Izadi said, “Don’t argue with me on fight day, bitch.”

Logan Paul explained why this was a big deal. “That can’t happen on fight day,” he told the camera. “Anything to drain Jake’s energy or stress him out is no fucking bueno.”

A few seconds later in the video, Izadi confronted Jake Paul’s assistant again, and after he was pulled apart by Jake Paul’s trainer and Boxing Hall of Famer Shane Mosley, Logan Paul told Izadi, “For the sake of Jake, you’ve got to just …”

That’s when Izadi noticed he was being filmed by Logan Paul’s cameraman, and Izadi rushed toward him and threw a punch.

Logan Paul responded to that by attacking Izadi.

“Jake’s cam, no problem,” Logan Paul said describing the scene afterward. “Not to my cam.”

Jake Paul jumped on Izadi’s back from behind, forced him to the ground, and put some kind of chokehold on Izadi that had him immediately tapping the floor to ask for relief.

“This is out of control,” Jake Paul said as his brother and his friend struggled on the ground. “Now, Armani, you fucked up.”

Ultimately, it didn’t matter for fight night, because Jake Paul dominated his opponent that evening anyway. But it’s just another mark against Izadi—who, in the past, has pleaded guilty to being a pimp and for attempted battery and who has been accused of threatening to kill one of the prostitutes who worked for him.

As for how it ended between Logan Paul and Izada, Paul wrote on YouTube, “We’re cool now.”