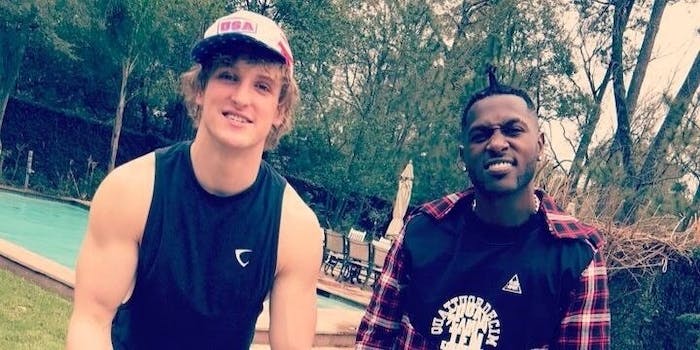 Brown had one simple message for Paul: Square up.

Since playing in the NFL seems out of the question for now, controversial wide receiver Antonio Brown has set his sights on a different kind of sporting accomplishment. He says he wants to beat up Logan Paul in the boxing ring.

Brown, one of the best pure talents in professional football, had a bumpy 2019, wearing three different team uniforms before he was basically banished from the league after a rape accusation. But he must see money in Paul, who lost a close match to KSI in December in front of 12,000 people at Staples Center in Los Angeles.

Considering the YouTubers each made a $900,000 purse for fighting each other and considering that the event was the fifth-most watched stream on DAZN in 2019, it’s clear there is opportunity for Brown. And clearly, Paul wants to continue fighting either as a boxer or a mixed martial artist.

“I can go fight in UFC or I can fight in Bellator,” Paul told the Daily Dot in November. “Wherever I go, people will follow.”

Last month, Paul took the first step toward a potential matchup with Brown, telling Barstool sports radio that he wanted to “fuck up” Brown.

– what did he do after a video of “him” blowing a dude went viral?
– which NYC billionaire was he at dinner with when the controversy broke
– response to KSI talking shit on our pod
– which NFL superstar did he challenge to a boxing match pic.twitter.com/GGrqIstLgG

Late Monday night, Brown responded on Twitter, telling Paul simply to “square up.” Brown also told the radio show that he would “fuck Paul up.”

Which led to Paul’s response of “I’d drop you faster than the Patriots.”

After a tumultuous end to his time with the Steelers early in 2019 which saw Brown feud with the team’s star quarterback and the coach, Pittsburgh traded him to Oakland. Brown beefed with the league for the kind of helmet he could wear before getting into a screaming match with the Raiders general manager at practice. He was fined—which essentially cost Brown his $30 million guaranteed contract—and then was released, where he was promptly picked up by the Patriots.

But after playing one game during the 2019 season, Brown was cut by the team after he was accused of rape.

Now, Brown wants back in the spotlight, particularly against a potential competitor with whom he’s been friendly in the past.

If Brown were to face Paul, though, the odds against him would be long. One online sportsbook has made Brown a 10/1 underdog, causing Brown to tweet out, “Oh really.”