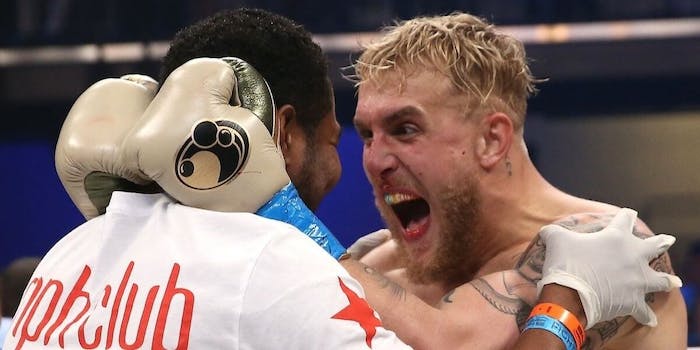 Jake Paul’s TKO win over AnEsonGib brings out the memes

'My disappointment is immeasurable, and my day is ruined.'

Jake Paul dominated and knocked out AnEsonGib in their YouTube boxing extravaganza on Thursday night. Gib looked like a novice who was well out of his element. Paul looked like a neophyte who actually has some technical skills. The entire event made each YouTuber plenty of money and brought a younger generation of fans to DAZN so they could live stream the event, even as much of the older generation of boxing fans complained about the social media star invasion.

Naturally, Paul’s victory inspired plenty of memes and drew a plethora of comments about how he looked, what he wore, and whether watching the fight was even worth their time.

It started during Paul’s ringwalk when he turned around to face the camera and reveal that he was wearing a glittery gasmask. Considering his brother Logan Paul caused plenty of controversy this week with an Instagram photo of him and three women donning masks and making a coronavirus joke, it was a bold choice by Jake to introduce himself to the Miami crowd with that contraption on his face.

Once the fight started, though, it was clear Paul was the much better boxer. Gib’s strange bouncing/crouching style seemed like a bad idea, considering that kind of stance will leave you off balance if a hard punch lands on you. Which is exactly what happened when Paul clocked Gib with a right hand to knock him to the canvas. A few seconds later, Paul’s hard left hook sent Gib into the ropes for another knockdown.

I can’t believe I stayed up untill 5am for Jake Paul to knock out gib in the first round and gib to come out like this #GibvsPaul pic.twitter.com/DbDmeosOBD

After Paul landed a pair of right hands that led the referee to stop the fight to save Gib from more of a beating, boxers Ryan Garcia (a lightweight prospect who is friends with the Paul brothers) and Enzo Maccarinelli (a former world cruiserweight titlist) checked in with their thoughts—and they were impressed. Assuming, of course, they weren’t being sarcastic.

Despite his loss, some commenters still felt like Gib actually won the night.

Big W for @AnEsonGib despite the result. Forced a fight with Jake Paul (deservedly), got a massive pay cheque and promoted himself as a brand to a much wider audience especially in America. GG it’s all wins!!!

Still, some people couldn’t help but be disappointed with the event and/or the result.

Me after the Jake Paul fight pic.twitter.com/yMPQOmDu7F

It must suck to be Jake Paul to be honest. Even when he wins no one likes him

For those who didn’t see the match, you can watch it in its (short) entirety below, beginning at the 4-minute mark.

But if you missed the event and the chance to weigh in online in real-time, don’t worry. This won’t be the last we see of Paul in the ring, because he’ll almost certainly fight KSI next. And when that occurs, the memes will be sure to follow.