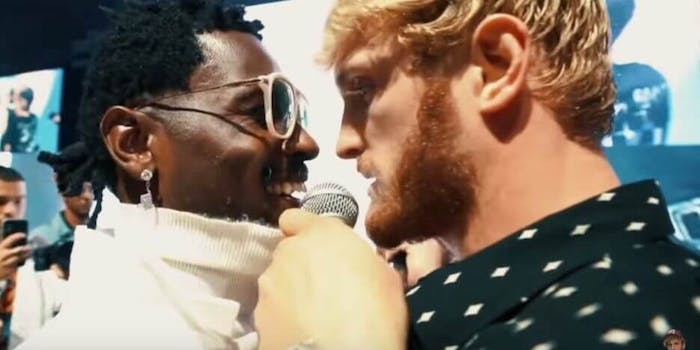 He's calling out the NFL star.

In the aftermath of Jake Paul’s knockout victory vs. AnEsonGib last month, older brother Logan Paul is highly motivated to find his next opponent in the boxing ring. And he knows exactly who he wants: former star NFL receiver Antonio Brown.

Though no contract has been struck yet between Logan Paul and Brown, Paul is taking the next logical step for a YouTuber who has about 20 million subscribers: making a diss track on his potential opponent.

In a YouTube video released Sunday—titled “Going Broke” and which, as of this writing early Monday morning, already had more than 3 million views—Paul goes hard after Brown. He pokes fun at Brown for being dropped by his agent because of all his controversies, for being knocked out in an NFL game by the Bengals, for having five kids (Paul rapped that Brown’s “pullout game [is] weak”), and because “Mr. Whole Lotta Money [is] going broke.”

Unlike other Paul projects, the people who have watched the video seem to really enjoy it. As of this writing, the video has more than 372,000 likes and only 13,000 dislikes.

Brown has had a controversial past couple of years. He was dismissed by three NFL teams in 2019, and he cost himself tens of millions of dollars with his antics (which included screaming at the Raiders general manager during practice and ripping Patriots owner Robert Kraft after New England parted ways with him). Brown has also been accused of rape, and in January, he went viral by filming himself screaming obscenities at the mother of his child outside of his Florida home and at local police who tried to intervene.

In the past several weeks, Brown and Paul have been eyeing each other. They’ve beefed online with Brown saying he’d “fuck Paul up,” with Brown telling Paul to “square up” on Twitter, and with Paul responding to that by saying he’d drop Brown faster than the Patriots did. After Jake Paul’s win vs. AnEsonGib in Miami, Logan Paul and Brown got into a face-to-face confrontation and a brief shoving match.

According to promoter Eddie Hearn, Brown has been offered a seven-figure deal for a fight with Paul that could happen in April. Paul, who made $900,000 during his loss to KSI, apparently has already accepted a deal.

“I’m here to save you, take the blessing,” Paul rapped. “Cuz your career fell apart like One Direction.”