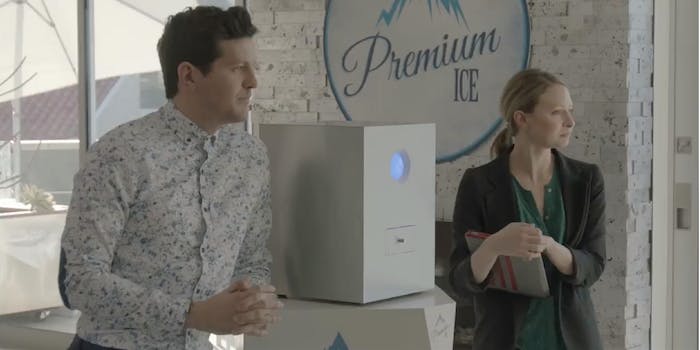 In late June, a “City of Angels” mural appeared on a wall on Melrose Avenue, which swiftly tendriled into social media. The rules of the game stated you had to have more than 20,000 followers on social media or be verified to take a photo with it, and the stunt did what it was supposed to: People got mad about the mural, made fun of it, retweeted it out of spite. But they engaged.

The mural was promo for Like and Subscribe, a new series parodying influencer and YouTube culture from Verizon’s go90, which was set to debut on July 9. Shortly after the reveal, Verizon announced it would be killing off go90 at the end of July. A show about digital culture—buffered by a viral stunt—colliding with a gasping millennial-focused platform might be the most realistic illustration of the digital media ecosystem in 2018. It’s almost poetic.

I was able to watch a good chunk of the series on go90 Monday morning, but by the afternoon it had disappeared from the site. Before an advanced screening Monday night in L.A., Jack Wagner, series creator and the influencer behind the mural, said the release date was being pushed back. Verizon did not respond to a request for comment.

Goldwynne has gathered the personalities together in a house to make content, and it’s fairly obvious that the show is spoofing Jake Paul’s hellish Team 10 pad, which vexed neighbors for months and housed YouTubers who alleged abuse. A rival prankster named Zack Jake (Cory Walls) is another Logan/Jake Paul mirror, though he could really be any of the braying prank personalities on YouTube.

Wagner told Nylon that one of the obstacles of creating a show about influencer and YouTuber culture was the collision of reality and parody: “In the process of writing this, I would write an episode where something would happen that I thought as so absurd, so ridiculous, [as] a way to satire something, but then a couple weeks later, it would happen in real life.”

The last six months in the YouTube ecosystem have been surreal: Logan Paul’s suicide forest catastrophe; Shane Dawson unraveling disastrous YouTuber festival TanaCon like a true-crime documentary; YouTubers dying after being swept away by a waterfall; and admitting to working with Mexican cartels to dispose of bodies. A silly mural pales next to those events, but the backlash it set off is indicative of how fine the line is between reality and parody.

Over the last year Ive been developing my own show called @likeandsub. Its about a topic very very dear to my heart…influencers. Its out July 9th…I am starring in it & also I executive produced it.. A lot of work went into this & i am so excited for you all to finally see it. pic.twitter.com/Y1DtzD6Ril

The characters of Like and Subscribe will be familiar to those entrenched in online culture—I found myself laughing at a few because they’re familiar. We’re introduced to a “Vine director” who is trying to (re)capture a viral moment. The housemates speak in internet language—the title of the show is parlance of YouTubers. There’s the constant presence of brands. The influencers are given media training by a woman who is decidedly not an influencer (played by Betsy Sodaro), but she does manage to vocalize one of the biggest issues with YouTube “prank” culture, which has become increasingly tragic and cruel. She tells Lil Dose: “Your pranks are not funny, they’re actual crimes.” Elsewhere, Lil Dose thwarts Zack Jake by having a sincere moment of reflection during a prank. The series needs a few more of those revelatory moments about the culture it’s parodying, but perhaps those were supplied by the mural.

As of Tuesday, it still isn’t clear where Like and Subscribe will go after its fleeting apparition on go90. If this is a prank, it would only be fitting. But this shuffle opens it up, potentially, to a wider audience. Will people still engage after the mural fades?