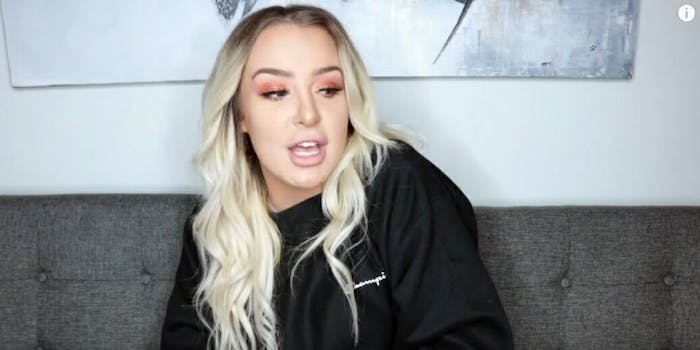 With VidCon in full swing this week, the popular online video conference garnered some competition from YouTube star Tana Mongeau. But Mongeau’s festival creation, dubbed TanaCon, was overrun with problems on Friday, as thousands of fans without tickets reportedly tried to crash the party, forcing organizers to try to switch venues at the last minute.

And it seemingly was a huge mess.

Polygon reported that more than 20,000 fans showed up for the event—many of whom didn’t have a ticket—and forced the fire marshal to shut it down.

“I just want to reiterate 20,000 people showed up outside which is unsafe anywhere and security and safety is my number one priority. We were told VidCon itself was holding around 20,000 and we are so mind blown,” Mongeau tweeted on Friday. “Now that safety and security is on lock, our moves are bigger venues and insane safety measures with normal programming to resume [Friday and Saturday]. I love you guys and I am so sorry. I had no idea and want you to be safe.

“I am doing everything in my power to make sure that whatever happens from here is as safe as can be. Safety is my number one priority and I never ever expected IN ANY WORLD FOR 15,000 unticketed people to show up… being 19, and planning a convention is the hardest thing I’ve ever done and being the face of every problem is hard and I’m sorry. So sorry. I wish we would’ve had two arenas and 10,000 more security. I’m fucking dumb obviously but at the end of the day my number one priority is your happiness. And to anyone saying that I did this with ulterior motives, I would’ve never had free tickets. I’ll show you the damn statements, I am not out here profiting I’m putting my own money into it lol. I love you guys, had no idea 20,000 people would ever show up & am so so sorry.. we are figuring out our best possible SAFE plan rn.”

Some people, though, were less than pleased.

FFCs (featured fucking creators) found out earlier this week that despite paying extra money for “line skipping” they’re not guaranteed to meet anyone, even with a reserved M&G. Reserved M&Gs sold out in minutes pic.twitter.com/LJmFwxOutx

no creators schedule was checked for clashes with vidcon. this means creators like elijah daniel, mikey murphy, jennxpenn, and the gabbie show all have overlapping panels and M&Gs pic.twitter.com/pdKcF110vL

Some attendees reportedly waited in the Anaheim, California sun for up to six hours trying to get in the convention, according to TubeFilter.

It’s unclear what Saturday will hold for TanaCon, though Mongeau said she would move the convention to a different hotel in Anaheim.

moving the show to a new venue within minutes away from this one that holds an extra 5,000 people and doing a free show with some very special guests!! tomorrow everything resumes normally & shane and i are working on some awesome cool stuff we luv u❤️

Update 1:52pm CT: On Saturday, it was reported that TanaCon has been canceled.

Just found out Tanacon has been cancelled. I’m so sorry to anyone that came out here to see me. It wasn’t my event and if it was it would have been run differently. i’m heart broken looking at the videos of people waiting all day in the sun getting burnt.

Really sad to see #TanaCon was cancelled.I feel bad to all the fans who were waiting in the 🌞 yesterday. But I know @tanamongeau heart was into it and the fans supported her. Just bad planning. But I hope they can revisit it in the future because someone needs to take on Vidcon