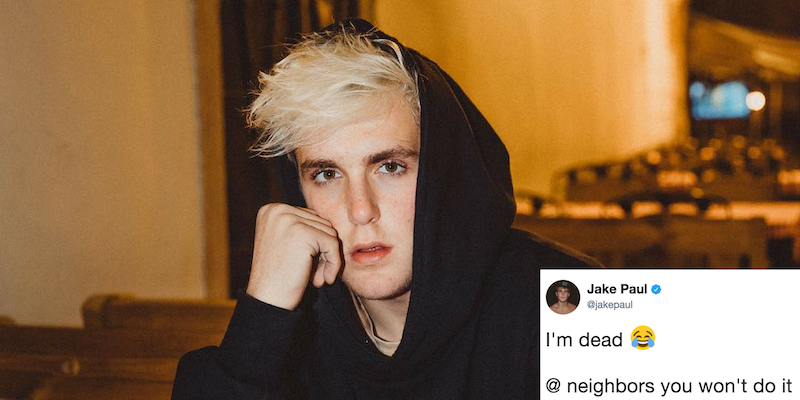 According to KTLA 5 News, neighbors of the Disney Channel actor and social media star have had enough of the 20-year-old’s antics and his fan group. They’re overwhelmed by the “endless stream” of fans—young teen girls and their parents—who crowd the street and lawn in front of Paul’s home daily.

One recent stunt concerning neighbors involved Paul lighting furniture on fire in an empty swimming pool in his back yard, with flames allegedly growing taller than the house.

“We used to be a nice, quiet street, and now we’re just this war zone,” neighbor Maytal Dahan told KTLA 5. “We’re families here and we’re more than happy to have them live here if they’re respectful of their neighbors, but they’re not.”

The neighbors are scheduled to have a “special meeting” with city leaders and city code enforcers regarding Paul’s behavior. Depending on the outcome of the meeting, the neighbors may file a class-action public nuisance lawsuit against Paul and the homeowner of the property.

Paul said he feels bad for his neighbors, but said there was nothing he could do about his fans’ behavior, despite his address being public knowledge.

“I honestly—it’s terrible, it’s a bad situation. No, I feel bad for them,” Paul said. “There’s nothing we can do though. The Jake Paul-ers are the strongest army out there. Dab.”

On Twitter, Paul’s sung a different tune, challenging his neighbors to take legal action and downplaying his behavior in comparison to “innocent people getting shit every day.”

Crazy how many ppl care about me being a "bad" neighbor

U shld worry about tht

Perhaps Paul’s pranking antics would be better fit for a role in another installment of Seth Rogan’s and Zac Efron’s Neighbors movies, rather than real life.