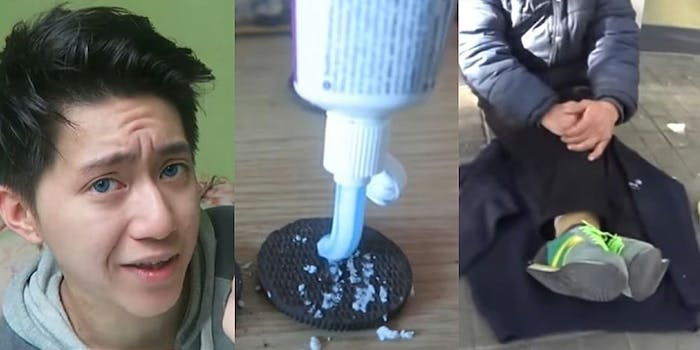 ‘Look at the positive side: This will help him clean his teeth.’

A YouTube star named Kanghua Ren faces up to two years in prison after playing a prank on a homeless man that involved filling Oreo cookies with toothpaste.

Kanghua, who vlogs under the name ReSet and who has 1.2 million subscribers, filmed himself scraping the filling out of the cookies and squeezing out the toothpaste to replace the filling. Then, the 20-year-old Kanghua approached the homeless man, gave him a‎‎‎ €20 bill ($24), and walked away after the man showed his gratitude.

On the video, the Chinese-born Barcelona resident said, “Maybe I’ve gone a bit far, but look at the positive side: This will help him clean his teeth. I think he hasn’t cleaned them since he became poor.”

As the Independent notes, Kanghua is facing a charge of a crime against moral integrity. Along with the proposed prison sentence, prosecutors are also asking that Kanghua pay a €30,000 ($37,000) penalty.

According to reports, the homeless man vomited five minutes after eating the cookie and apparently feared for his life.

The video has been deleted.

Prosecutors said the YouTuber offered the man €300 to stay silent. According to the Independent, prosecutors also said that, in previous videos, Kanghua had made sandwiches filled with cat excrement and offered them to children and elderly people for the sake of his vlog. Those videos do not currently appear on his channel.