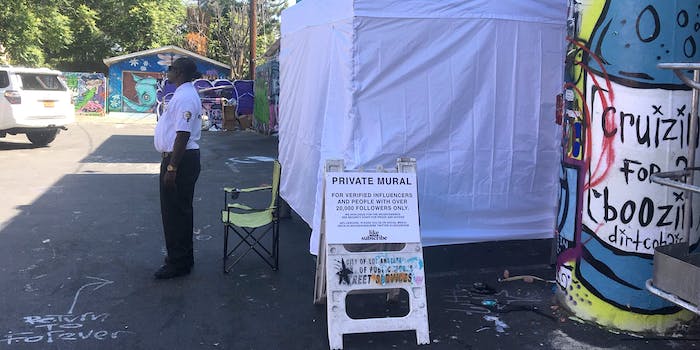 It's bad marketing, sure, but it's already won.

A mural in Los Angeles is tearing at the fabric of reality, mainly for its parameters. To pose next to it, you must have more than 20,000 followers on a social media platform or a verified blue check.

A writer for Vice tweeted about its existence on Monday afternoon, and eyes immediately started rolling. But the critiques took different forms. The mural is bad art, some said. It’s exclusion, said others. It’s dumb viral marketing, went another thread. Was the Vice contributor in on it? (He didn’t respond to the Daily Dot’s request for comment.)

There’s a new security-guarded mural in LA that only allows influencers and verifieds to take pics in front of it. pic.twitter.com/PDlLJ9C0DI

Lotta mural question DMs so lemme just share what I know here:
– address is 7753 Melrose Ave.
– it’s up from now until 6/27 (tho I highly doubt it will remain unvandalized for that long)
– it’s 20K followers OR a verified check to enter
– your reggo friends gotta wait outside

People started talking about Black Mirror, the go-to dystopian media reference—specifically the “Nosedive” episode where people’s personal ratings determine their social hierarchy. Others claimed it might be a Nathan For You stunt, but that show is a little smarter than a mural with shitty angel wings, Nashville-style. Netflix got in on the brand synergy Tuesday morning with a tweet asking: “at what point do I send the entire world a cease & desist for stealing @blackmirror’s trademark misery.”

at what point do I send the entire world a cease & desist for stealing @blackmirror’s trademark misery https://t.co/JLW7YwF44m

On the bottom of the sign for the “private mural” is a logo for something called Like and Subscribe, which has Twitter and Instagram accounts teasing a July 9 release date, though it’s not clear for what. Influencer Jack Wagner, aka versace_tamagotchi, posted about the mural on Monday, and cited the “upcoming release of my new show,” but the rest of the post is a little too earnest. The Twitter avatar for Like and Subscribe features EDM DJ and known prankster Dillon Francis holding a photoshopped magazine that includes comedian Brandon Wardell on the cover. Wagner and Wardell co-host a podcast called Yeah, But Still.

very exciting day today folks. to celebrate the upcoming release of my new show @likeandsubscribe we created a beautiful instagramable mural designed specifically for influencers. influencers work so hard every day to curate beautiful feeds and inspire us all, we wanted to make something specifically for them. most of the best murals in LA are already posted too often, which is why this mural is for verified influencers only (or people with over 20k followers). We even hired an armed security team to guard the mural this week to make sure only verified influencers are able to take photos with the mural. this is something i thought influencers would appreciate but unfortunately a lot of them got very mad at this and only had bad things to say. we wanted this mural to capture the themes of positive vibes and love, apparently some people dont have enough of that in their lives. this mural is not about excluding anyone. we put alot of work into making this mural great and we just wanted to showcase it in the most curated way possible. great painters pick the best possible canvas for their masterpieces, we are doing the exact same thing but with accounts. if banksy were alive today i feel like he would do the exact same thing.

Still, for all the hate the mural and its rules received, it is likely initiating the desired conversation around what “influencer” means and feeding into whatever Like and Subscribe is. (Likely a webseries, per IMDb.) The social media influencer has reached the point of parody; YouTubers like Jake Paul are offering courses on how to be a better influencer—at a price, of course. Elsewhere, they’re trying to con hotels into free stays in exchange for free publicity. There is a grifter element to the influencer, sometimes very literally, as in the case of the now-incarcerated Anna Delvey. And then there’s the rise of virtual influencers; in April one fake Instagram influencer “hacked” another’s account and went viral.

This stunt appears to be more parody than grift. A writer for Inverse visited the mural and offered a surreal report. He also claimed the security guard and a music promoter who was on site named David Matthews weren’t sure what the mural was all about; a man named Jack allegedly contacted them last weekend.

When I visited on Monday afternoon, I expected there to be a line around the block. Instead, it was just a security guard idly gazing at an empty lot. As I approached the tent, he got up from his lawn chair and went to the alleyway to make a call. I instantly tried to sneak in. The moment I stepped inside, I heard a loud honk. A man screamed from a minivan. “ARE YOU VERIFIED? ARE YOU VERIFIED?”

Chilling words, but perhaps the emptiness of the endeavor is the point.