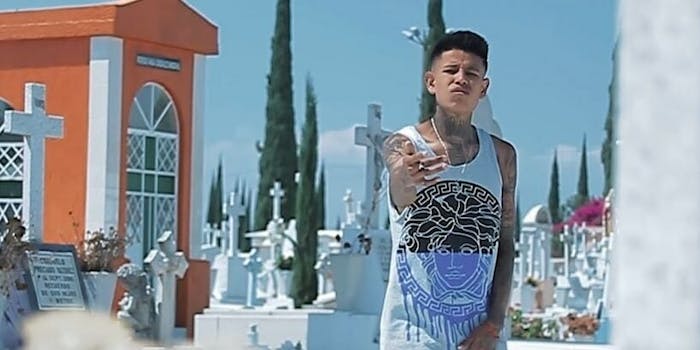 Here's how much he was paid for his services.

A Mexican YouTube rapper has reportedly admitted to dissolving the bodies of three film students in acid after he was paid by a drug cartel.

YouTuber QBA, who has 128,000 subscribers and whose real name is Christian Omar Palma Gutierrez, told state prosecutors he was paid 3,000 pesos ($159) per week to work for a cartel called Jalisco New Generation, according to the AFP.

The cartel reportedly kidnapped and tortured 25-year-old Salomon Aceves Gastelum, 20-year-old Daniel Diaz, and 20-year-old Marco Avalos before killing them. According to KVIA, Gutierrez’s job was as the “cook,” where he dumped dead bodies into acid baths in the yard of a cartel safe house. After two days, he would return to release the leftover fluid into a storm drain and dispose of the remaining sludge into nearby fields.

He would come back after two days – after the acid had done its work – and open drain valves to release the fluid into the storm drain, and remove any remaining sludge to dump it in fields, the sources said

More from the AFP:

In songs with titles such as “Death Has No Schedule,” Gutierrez sings about violence, weapons and drugs, almost always in a threatening tone.

His professionally-shot videos are littered with images of poor neighborhoods where young gang members take drugs and show off weapons—while others feature the rapper and his friends showing off in luxury vehicles or on motorcycles.

[Chief investigator Lizette] Torres confirmed the videos formed part of the criminal investigation into the murders.

Torres said the rapper will be charged with aggravated kidnapping. Police say Gutierrez also has been linked to three other murders.