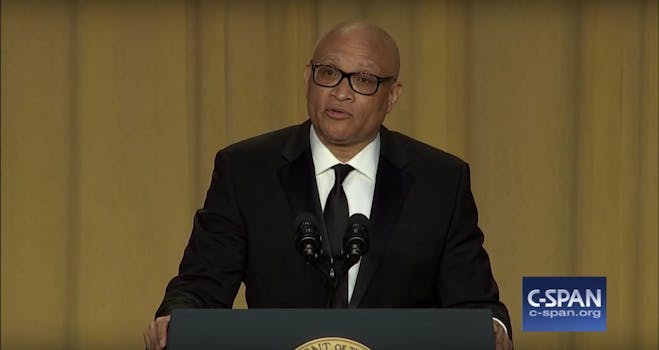 It's all starting to make sense.

Weird Twitter finally got its moment in the spotlight at the White House Correspondents’ Dinner on Saturday night. The evening’s emcee, Nightly Show host Larry Wilmore, spent part of his speech highlighting the meme that presidential hopeful Ted Cruz is the Zodiac Killer.

In a speech that took aim at President Obama’s drone strikes, cable news networks, and Donald Trump, as well as other presidential candidates, Wilmore paid particular attention to Cruz. The Texas senator is disliked by many of his colleagues, even within the Republican party—and as Wilmore points out, even O.J. Simpson probably dislikes him.

The comedian brought out the meme de force of Cruz being the Zodiac Killer at around the 16:41 mark. It’s a joke that has spiraled out of control, even leading to a real polling firm to ask voters about it and the possibility of Google hiding it from search engines. Though it’s impossible for Cruz to have actually been the Zodiac Killer based off his age, the presidential hopeful has yet to deny it.

“I’m not making that up,” Wilmore said, while also playing devil’s advocate. “Come on, that’s absurd. Some people actually liked the Zodiac Killer.”

The zingers continue from there. To Wilmore, the Zodiac Killer identity is pivotal to the Cruz campaign. Every victory is because people forgot that he’s the Zodiac Killer while any defeats are because of it. Wilmore even brought up John Boehner’s recent comments about how Cruz is “Lucifer in the flesh.”

“Lucifer is horrible, but he’s not the Zodiac Killer,” Wilmore added.

All manners of campaign strategy were up for scrutiny and Wilmore is determined to get to the bottom of it. Cruz’s recent yet presumptuous selection of Carly Fiorina as his vice president is particularly strange because serial killers always work alone. It’s just one more puzzling detail that a mastermind such as Cruz would use to throw the American public off his trail.

With Wilmore’s exposure of this possible truth put forth on a national level, it may be even harder than ever to hide it from Google.