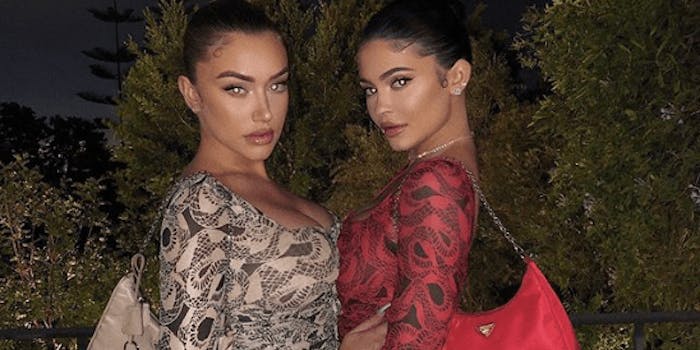 In true Gen Z fashion, Kylie Jenner is refusing to let something as silly as a little fight with her best friend sabotage her ‘gram aesthetic.

For her possible last Instagram of 2019, Jenner posted a photo of her and BFF Stassie Karanikolaou. The two are wearing matching print dresses and mini shoulder bags, and Jenner is showing off a fresh manicure.

The two look fabulous as always, but Jenner shocked her followers with her caption.

“We’re mad at each other rn but this pic looks good with my feed,” Jenner revealed.

Karanikolaou posted the same picture on her Instagram shortly before Jenner, but captioned it with a simple “i love you.”

Karanikolaou then commented, “lmaoo” and “i love you my twin” on Jenner’s post. Jenner responded, “lol don’t speak to me until 2020,” but that’s technically less than 24 hours away, so it’s likely their fight–which doesn’t sound too serious–will be resolved soon enough.

Jenner and Karanikolaou have been friends for nearly a decade but became closer recently after Jenner stopped talking to former friend Jordyn Woods. After Woods was spotted kissing Khloé Kardashian’s then-boyfriend Tristan Thompson at a party in February, Jenner’s fans started seeing a lot more of Karanikolaou.

Jenner and Karanikolaou go out together, recently celebrated the holidays together, and no one can forget the infamous Handmaid’s Tale birthday party Jenner threw for Karanikolaou’s 22nd birthday. They even got matching “Stormi” tattoos after Jenner’s daughter was born. But Jenner and Woods also had matching tattoos, so maybe it is still too early to assume we won’t be getting a Red Table Talk anytime in the future with Karanikolaou.