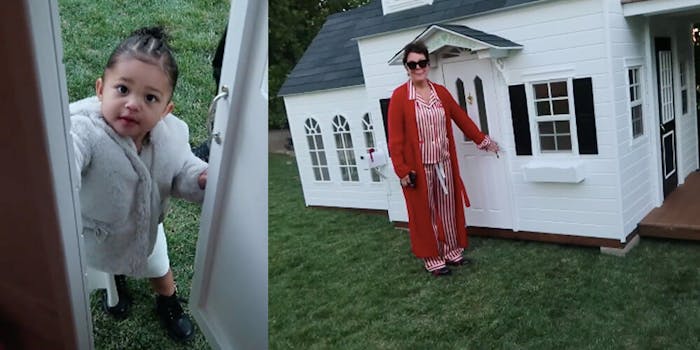 The toddler received a mini house with a functioning doorbell, air conditioning, and balcony.

There’s nothing quite like the holidays to remind everyone just how different rich people live compared to the rest of us. While Vogue editors may be jaunting off to the latest hot spots for a sprinkling of Christmas cheer, even rich toddlers are reaping the rewards of this spending season.

In fact, if you happen to be the granddaughter of Kris Jenner, you might find yourself with a whole freaking house waiting underneath your Christmas tree.

The Kardashian-Jenner matriarch surprised Stormi Webster, the almost-2-year-old daughter of reality star Kylie Jenner and rapper Travis Scott, with a literal baby mansion that’s reminiscent of one Kylie apparently had herself at Stormi’s age. Because gifting toddlers two-story houses is a totally normal tradition passed down through wealthy families.

“This makes me want to cry,” Kylie exclaimed when Kris revealed the studio-apartment-sized “playhouse” to the toddler.

“This just reminds me of when you were a little girl,” Kris responded, actually starting to cry. “I want you to have the same memories with your daughter.”

When Stormi was brought to her new solo pad a little while later, the absolute treasure of being gifted with an entire house–complete with a functioning doorbell, air conditioning, and a whole damn balcony–somehow seemed lost on her and her tiny baby life experience.

But people on Twitter who were subjected to the nine-minute vlog drilling home what charmed lives the ultra-rich lead were flabbergasted by the gift.

“Why the fuck is Stormi’s playhouse bigger than my family house,” Twitter user @currentsfast questioned.

why the fuck is Stormi's playhouse bigger than my family house pic.twitter.com/DVU5c5A0C0

Everyone had jokes about the baby’s mansion.

“Stormi’s playhouse vs the playhouse I had,” Twitter user @kashmirVIII wrote alongside a much more relatable photo of a girl in an actual cardboard box.

Stormi’s playhouse vs the playhouse I had pic.twitter.com/SoYqXWt3Z0

Me seeing stormi’s mini house is bigger than my bedroom #KylieJenner pic.twitter.com/hYTEyVGDCI

Stormi playhouse has wood floors while my actual apartment has carpet….. pic.twitter.com/VDAxNSka5f

stormi has her own mansion at the age of 1 and i can just about afford a meal at mcdonalds pic.twitter.com/uVH4HrVFJN

But some folks never seem to have made it past the part of the video where Kylie tells Stormi they’ve got a surprise for her, and the phenomenally wealthy child assumes she’s getting a Birkin. Again, just a totally normal thing for a baby to assume they’re getting a handbag worth tens, if not hundreds, of thousands of dollars.

“Not even 2 and she really said ‘…Birkin?’ when she heard surprise,” Twitter user @Albaaa_gux wrote. “Stormi girl I wish I could relate.”

Not even 2 and she really said “…Birkin?” when she heard surprise. Stormi girl I wish I could relate pic.twitter.com/A2NhB4q8Q5

stormi: *2 years old*
kylie: we got a big surprise for you
stormi: a bbbb BURKIN

SHE KNOWS WHAT A BURKIN IS IM ACTUALLY DEAD pic.twitter.com/eYTTZp5i7T

Stormi when she was expecting a Birkin, but got a mansion instead. pic.twitter.com/0NFb0XHYMR

So whatever you got your family members for Christmas, throw it in the trash! It’ll never live up to what rich people casually toss at each other every day!