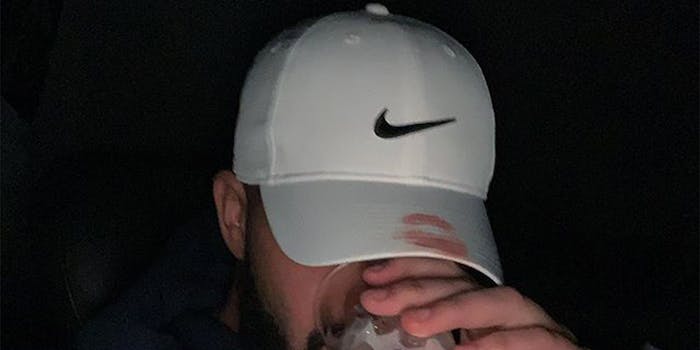 The posters, as always, are on the case.

Insta sleuths are on the case, and they think they’ve cracked the romance of Drake and Kylie Jenner wide open.

Two Instagram posts are being used as evidence in the court of public opinion to convict Kylie and Drake of being young and in love. Well, one is a lot younger than the other, but you get the point.

Exhibit A: Drake posted a pick of himself in a white Nike cap and Navy blue hoodie. Seems innocuous enough, right? Look closer you fool!

The hoodie is from Sierra Canyon, where Kylie attended school. Examine the white hat. Closer! You’ll note the lipstick marks: perhaps a nod to Kylie’s famous lip kits. And then the matching lip emoji in the caption? J’accuse!

Perhaps you remain unconvinced. Allow us to submit to the court Exhibit B.

Seventeen first pointed out that Kylie uploaded a pic of two new vending machines in their offices. On the right, Skittles. On the left, champagne. And of course, Drake’s nickname is none other than Champagne Papi.

Comments like “Damn you and drake are foreal,” and “Drake and Kylie???” have flooded the posts as Insta detectives have pieced this together. You can’t hide the truth forever!

The celebs have been coy about confirming anything to the tabloids or taking anything public despite dropping these hints. “Kylie doesn’t seem to be dating,” a source told People last month. “She sees Drake occasionally, but it doesn’t seem serious. She could be doing it just to make Travis jealous.”

Despite what is being said publicly, we are certainly amassing a body of circumstantial evidence here. Is it enough to convict these two of being love birds? Maybe not. But, it will certainly be enough to keep social media detectives on the case.