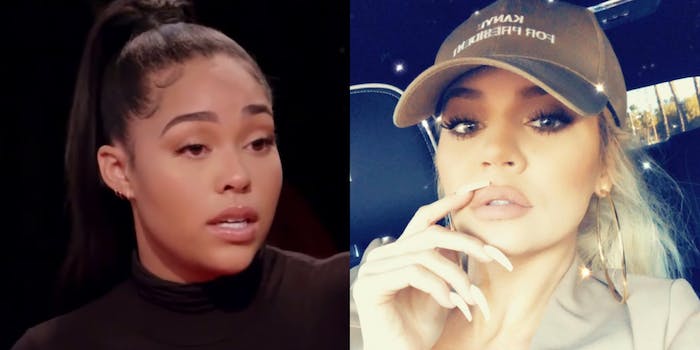 'This is not only an example of misogyny but racism.'

The internet on Friday was awash with reactions to the very public exchange between Khloe Kardashian and Jordyn Woods. The dominating attitude was in defense of Woods, and Black women on Twitter especially didn’t hold back criticism of Kardashian.

In an interview on Jada Pinkett Smith’s Red Table Talk on Friday, Woods defended reports that accused her of getting cozy with Kardashian’s ex-boyfriend, Tristan Thompson. Woods admitted to being drunk at a party with Thompson and that he kissed her on the lips, but she said he “didn’t make any moves” and denied reports that she had given him a lap dance.

Kardashian responded to the interview with tweets accusing Woods of “lying” and saying the 21-year-old was “the reason my family broke up.”

“If you’re going to try and save yourself by going public, INSTEAD OF CALLING ME PRIVATELY TO APOLOGIZE FIRST, at least be HONEST about your story,” Kardashian tweeted. She also said Thompson is “equally to blame” but that because he’s the father of her child, she did not want to publicly condemn him.

Why are you lying @jordynwoods ?? If you’re going to try and save yourself by going public, INSTEAD OF CALLING ME PRIVATELY TO APOLOGIZE FIRST, at least be HONEST about your story. BTW, You ARE the reason my family broke up!

Tristan is equally to blame but Tristan is the father of my child. Regardless of what he does to me I won’t do that to my daughter. He has been addressing this situation PRIVATELY. If Tristan were to lie publicly about what conspired,then yes I would address him publicly as well

As Cosmopolitan reports, Thompson also posted a tweet after the interview that said “FAKE NEWS” but quickly deleted it. But Kardashian’s tweets were met with backlash, especially from women of color who called Kardashian a hypocrite for publicly dragging Woods. It’s been widely reported that Thompson started dating Kardashian when his ex-girlfriend before her, Jordan Craig, was pregnant (Thompson has been accused of cheating on Kardashian with other women in the past, too).

And as several users pointed out, Woods’ account of the night with Thompson—that she was drunk when he approached her—could indicate harassment.

Given the Kardashians family’s history of appropriation and treatment of women of color, it’s not a good look.

Groupon even chimed in, referencing a famous Taylor Swift line, after writer Clarkisha Kent tweeted at Khloe Kardashian that “you ain’t care when he was sharing his Groupon peen with the world while you were pregnant with Two Truths and a Lie.”

“We would very much like to be excluded from this narrative,” Groupon tweeted.

THERE IS SO MUCH GOING ON HERE I’M YELLING pic.twitter.com/BJIpW6Rd6b

A better narrative for Kardashian to consider, perhaps, would include accountability for Thompson.