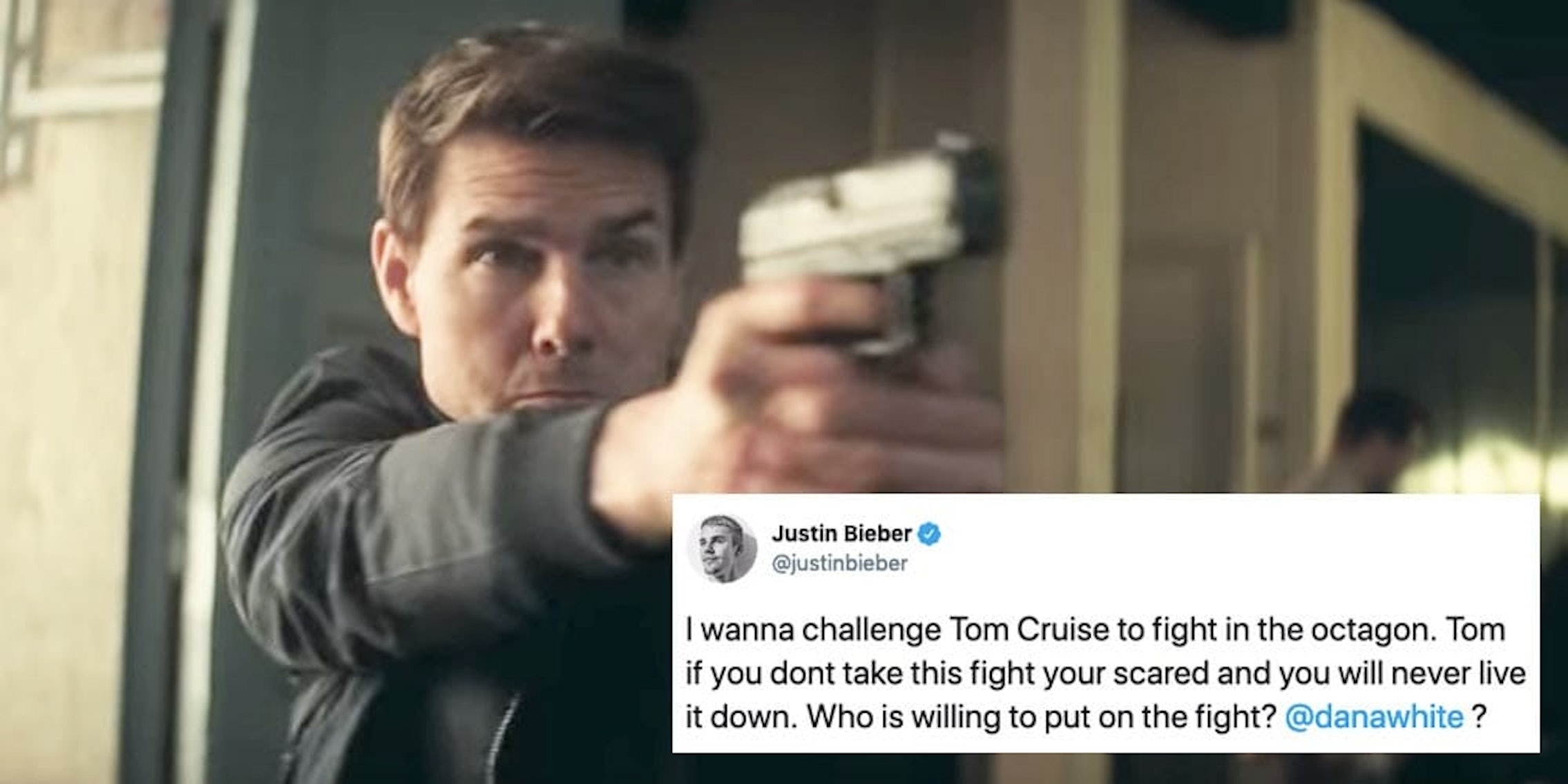 Quite possibly the weirded flex of them all.

Tom Cruise is a reclusive 56-year-old actor who regularly stars in action films such as Edge of Tomorrow, Jack Reacher, and of course, the Mission: Impossible franchise. Justin Bieber is a 25-year-old pop star who got his start on YouTube and whose personal life has largely overshadowed his music career in recent years.

On paper, these two seem to have little in common, and—unless the latter should turn to Scientology—it seems unlikely that their paths would ever cross. That was until on Sunday evening—when Bieber inexplicably turned to Twitter to challenge Cruise to a fight.

“I wanna challenge Tom Cruise to fight in the octagon,” Bieber tweeted. “Tom if you dont take this fight your scared and you will never live it down [sic].”

“Who is willing to put on the fight?” he added, tagging Dana White, president of the Ultimate Fighting Championship.

I wanna challenge Tom Cruise to fight in the octagon. Tom if you dont take this fight your scared and you will never live it down. Who is willing to put on the fight? @danawhite ?

Right off the bat, it goes without saying that Tom Cruise will never fight Justin Bieber. Not because he’s “scared” but because it seems highly unlikely that news of Bieber’s tweet will ever reach him. (Although Cruise is on Twitter, he rarely tweets other than to promote his own projects.)

Also, it’s worth pointing out that while Bieber does spend quite a bit of time at the gym—as evidenced by the singer-songwriter’s numerous topless Instagram posts—he would never beat Cruise in a fight.

Tom Cruise is well known for doing his own stunts and fight scenes, and quite honestly could probably very, very easily hand Bieber his own ass back to him. (Meanwhile, Bieber once almost got beat up by Orlando Bloom.)

As such, plenty of people were more than happy to remind Bieber of this fact on Twitter:

That 56-year-old could seriously injure Bieber if he wanted to. I’ve seen his stunts. https://t.co/xe6WTnvNc2

Tom Cruise would whoop Bieber’s ass with one hand tied behind his back. There I said it.

Tom Cruise would kick the ever living shit out of Justin Bieber. https://t.co/MXPuZPzdfI

Justin Bieber is 30 years younger and (probably) 5 inches taller than Tom Cruise. I’d bet a large sum that neither man has been in a real fight in his entire life. And yet I would bet a larger sum that Tom Cruise wins this fight. https://t.co/7gjx4RrerB

Me running to Twitter to make sure no one actually thinks Tom Cruise would lose in a fight to Justin Bieber… pic.twitter.com/mvhyywwk9C

Others just responded with jokes and memes:

absolutely nobody in the world:

certainly no 25-year-old singers to 56-year-old actors who never really seemed to claim to do this in real life, just pretends in movies, nice and fun for us and for him too:

Not one single self aware being in the universe:

At some point tonight Tom Cruise’s agent will have to call Tom Cruise and tell him that Justin Bieber has challenged him to a fight, this is an actual conversation that will happen https://t.co/D4H9tG27cP

Am I dreaming or did Justin Bieber acc just call out Tom Cruise to fight him? The simulation is glitching harddd

Well, at the very least, Bieber got the internet talking about him for a while, which may or may not have been his end goal. Because it seems as though everyone is in agreement that fighting Tom Cruise would not end well for him.