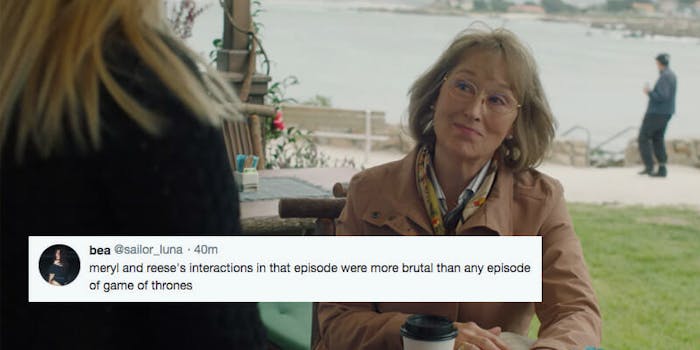 The Monterey Five don't stand a chance against Meryl.

When it was announced that Big Little Lies would return for a season two, fans were split. There’s the camp that insists season one was a perfect, contained story and to add more would likely ruin it. And then there’s those who weren’t ready to let the Monterey Five off the hook quite yet.

Then Meryl Streep joined the cast. Not a single sane person on the planet could turn their back on Meryl, and thus, we were all roped back in for season two.

Streep has taken on the role of Mary Louise, mother to the late not-so-great Perry Wright (Alexander Skarsgård), who has taken up residence in Monterey to help with her grandkids and poke around to find the truth about what happened to her son. And while she’s a timid, unassuming old bird on the surface, it’s immediately apparent that a sly snake slithers underneath the surface, perpetually prepared to strike and claim control.

Mary Louise has begun her ascent to HBIC with the most simple of moments—an astoundingly pointed dig at Reese Witherspoon’s character, Madeline—and fans are L-I-V-I-N-G for it.

“You’re very short,” she says, apropos of nothing. “I don’t mean it in a negative. Maybe I do. I find little people to be untrustworthy.”

Oh my god I am SCREAMING at Meryl’s character. She is SAVAGE. #BLL2 #BigLittleLies pic.twitter.com/SLbEZtMt5H

Can we discuss Meryl Streep’s insults at Reese?! She’s gonna rip these moms to shreds. She’s the OG on shade. “You’re short” #BigLittleLies2

And it’s Meryl, so even if you haven’t seen the episode, you know perfectly well she can take the simplest of comments and turn it into a burn so unforgivingly hot that you’re still scarred and scalding eighteen years later, with nothing more a look and a carefully crafted tone.

There’s a Meryl Streep rant about short women in #BigLittleLies that she delivers with such passive-aggressive venom that I felt personally victimized.

Where were you the night Meryl Streep called Reese Witherspoon short in a TV show? I was at home in the San Fernando Valley eating supermarket sushi.

But Mary Louise didn’t stop at the “short” insult. In a later scene, Madeline runs into her in a real estate office, and Mary Louise’s calm acknowledgment that Madeline is now wearing heels is brutal.

With Streep’s savagery comes awe and respect from Big Little Lies viewers. You know, in the way fans express their deepest respect.

So far, Mary Louise has only interacted with two of our main five ladies—her daughter-in-law Celeste (Nicole Kidman) and obviously Madeline. We’re only one episode deep, so we don’t know how much screen time she’ll get with the rest of the Monterey Five, but can you imagine a war of words between Meryl and Laura Dern? Or Madeline rushing to the defense of poor Jane (Shailene Woodley)? And god only knows if Mary Louise sinks her claws into Bonnie (Zoe Kravitz), she’s utterly done for—especially if she finds out that Bonnie is the one who actually killed her son.

Seeing as how the first season exhausted most of the events of the book, and Mary Louise wasn’t even around in the original text, we’re treading unknown water for season two. But there’s absolutely no doubt that Mary Louise is going to knock down anyone she considers a threat to her goals, and she won’t need very many words to do it.