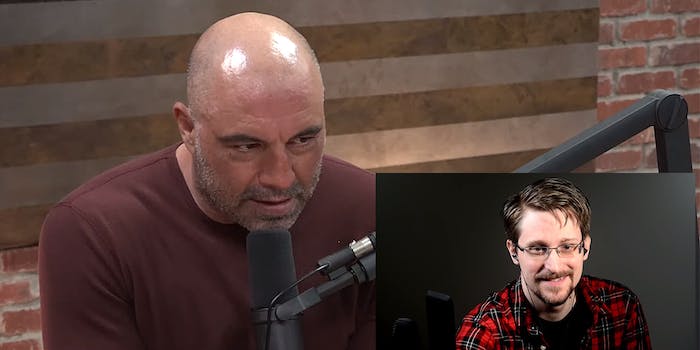 He didn't hold back.

In a move that surprised just about everyone, Edward Snowden appeared on the most recent episode of the Joe Rogan Experience for a nearly three-hour-long interview. Alongside talk of Area 51 and Snowden’s new book, Permanent Record, Snowden and Rogan discussed 9/11 conspiracies and privacy in the U.S. in the wake of the attacks.

“Everybody wants to believe in conspiracy theories because it helps the world make sense,” Snowden said. “It helps us believe that somebody is in control, that somebody is calling the shots, that these things all happen for a reason.”

I sat down for an absolute marathon with @JoeRogan. I hope you'll enjoy it.https://t.co/FmtoIKVGAt

But Snowden went on from there to argue that the existence of the intelligence is itself a sort of conspiracy theory.

“You’re talking about the existence of the intelligence community itself, which is basically constructed on the idea that you can get, I think there’s four million or 1.4 million people in the United States who hold security clearances, and you can get all these people to not talk, ever, to journalists or this, that, or the other,” Snowden said, saying government secrets can get kept.

According to NPR, more than three million federal civilian and military jobs require some level of security clearance and another 1.2 million clearances are held by contract employees.

Snowden moved on to discussing 9/11 and why he believes that though it was not an inside job, it could have been prevented.

“When you look back at the 9/11 Report, when you look back at the history of what actually happened, what we can actually prove, not what we can speculate, but what at least are the commonly agreed facts, it’s very clear to me, as somebody who worked in the intelligence community, not during this period of course I was too young, but very shortly thereafter, that these attacks could have been prevented,” he said.

Snowden continued, “in fact, the government says this too. But the government goes that the reason that these attacks happened, the reason that they weren’t prevented is what they call ‘stovepiping.’ There was not enough sharing, they needed to break down the walls and restrictions that were chaining these poor patriots at the NSA, the CIA, the FBI from all working on the same team.”

“And to some extent, they are correct on this. There were some limits on the way agencies were supposed to play ball with each other, but I worked there and I know how much of this is bullshit and how much of this is not … If the FBI wanted to send absolutely everything they had to the CIA, they could have done so, if the CIA wanted to send everything they had to the FBI, they could have done so. They didn’t, and people died as a result.”

You can listen to the entire three-hour podcast here.