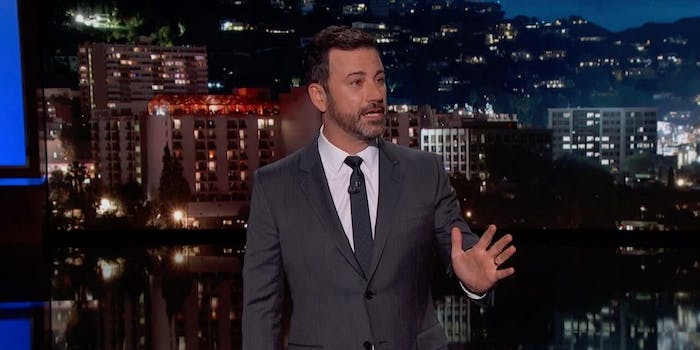 'I’d like to apologize for saying that children in America should have health care.'

Jimmy Kimmel returned to television Monday night—his first show since his emotional monologue on his son’s birth and heart surgery last week—and addressed the massive response, both the good and the bad, he’s received since.

After acknowledging that his story didn’t stop the House from voting on Trumpcare, Kimmel thanked his audience for their generous donations and let them know that Billy was doing well. But he also pointed out some of the nastier headlines calling him an “elitist creep” for asking that children should be covered by health insurance.

“Anyway, I’d like to apologize for saying that children in America should have healthcare,” Kimmel said sarcastically. “That was insensitive. It was offensive, and I hope you can find it in your heart to forgive me.”

He tore into another critic, former House Speaker Newt Gingrich, by demonstrating how misleading his claim about how people won’t be denied surgery after going to the hospital. It rarely ever works like that, and not only are there many, many doctors’ appointments after a hospital visit, Gingrich didn’t account for how much time parents would have to spend out of work to take a child to all of those appointments.

He ended it with a conversation with Sen. Bill Cassidy (R-La.), who said he wouldn’t vote on a new healthcare bill unless it passed the “Jimmy Kimmel Test:” where a child with a congenital heart defect would have access to everything they need for their first year of life. Kimmel grilled Cassidy on the healthcare bill and lifetime caps by insurers before suggesting an amended Jimmy Kimmel Test—one that covers all families and doesn’t give millionaires like Kimmel a tax break.