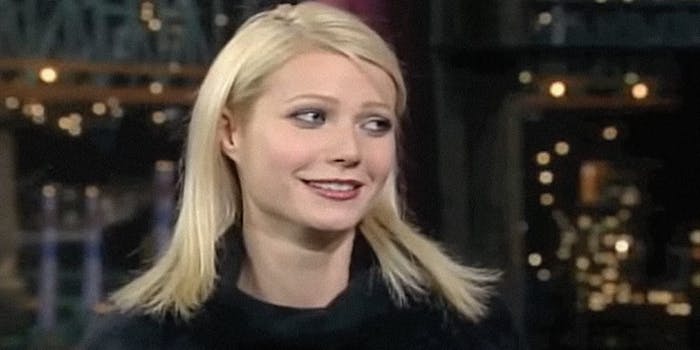 This 1998 Gwyneth Paltrow interview on Harvey Weinstein is particularly telling

'He will coerce you into doing a thing or two.'

In the wake of explosive reports from the New York Times and the New Yorker chronicling more than 30 years of sexual harassment, sexual assault, and rape allegations against Harvey Weinstein, actresses continue to come forward to share their stories, including Oscar winner Gwyneth Paltrow. She told the New York Times that Weinstein sexually harassed her when she was 22 and thought that he would’ve fired her if she had said anything about it. But in light of what we know now, a 19-year-old interview is particularly telling.

Paltrow appeared on The Late Show With David Letterman on Nov. 25, 1998, presumably to promote Shakespeare in Love (a Weinstein-produced film for which she would win the Best Actress Oscar for). In the midst of discussing her Thanksgiving plans with Letterman, he joked if someone had coerced Paltrow into showing up on his show.

“Do you count Harvey Weinstein as a coercer?” she asked.

Paltrow didn’t flat-out reveal that Weinstein was capable of systematically sexually harassing young actresses and female writers, reporters, and directors, which was something of an open secret among many women in Hollywood (and out of it) before the New York Times and New Yorker investigations came to light. And Letterman took it as a joke as he noted that Weinstein used to be a “junior mob kind of guy.” But Paltrow’s wording on Weinstein is particularly interesting.

“I do all my movies for Harvey Weinstein, that’s Miramax for all of you,” Paltrow explained to the audience. “And I’m lucky to do them there, but he will coerce you into doing a thing or two.”

This serves as a perfect reminder in case you still weren’t sure: Listen to women.