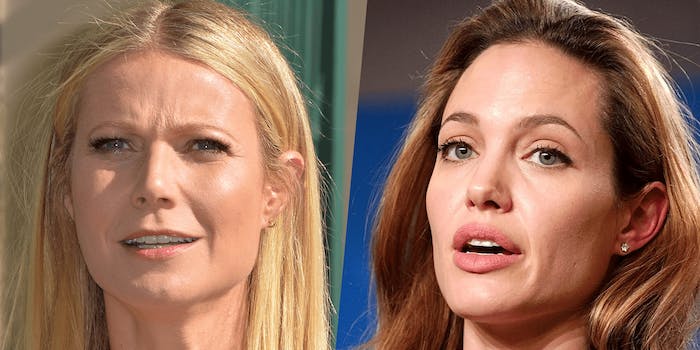 Gwyneth Paltrow and Angelina Jolie said that Harvey Weinstein harassed them as widespread allegations of sexual harassment against the film producer continue to come to light.

In an account published in the New York Times, Paltrow shared how Weinstein came on to her when the producer cast her to play lead in in the film Emma that his company was producing. The actress, who was 22 years old at the time, recalls how Weinstein suddenly requested for the actress to meet with him at his suite at the Peninsula Beverly Hills hotel for a work meeting before the film began shooting.

The starlet abruptly ended the meeting when Weinstein placed his hands on her and suggested they go to his bedroom for massages, she told the publication.

“We’re at a point in time when women need to send a clear message that this is over,” Paltrow told the publication. “This way of treating women ends now.”

“I was expected to keep the secret,” she shared. She said her relationship hit a rocky point after Paltrow’s then-boyfriend Brad Pitt confronted Weinstein after the actress confided in him. The actress ultimately chose to distance herself from the producer after years of working together, stating that “he was alternately generous and supportive and championing, and punitive and bullying.”

Paltrow won an Oscar for Shakespeare in Love in 1999.

Similarly Angelina Jolie revealed that Weinstein attempted to come on to her in a hotel room. The actress rejected his advances and then cut ties with the producer following the incident.

“I had a bad experience with Harvey Weinstein in my youth, and as a result, chose never to work with him again and warn others when they did,” Jolie told the publication in an email. “This behavior towards women in any field, any country is unacceptable.”

The actress starred in the Weinstein Company’s film Playing by Heart, which was released in 1998.

Investigative reports from the New York Times and the New Yorker detail claims from actresses of harassment against Weinstein, as well as allegations of rape and trading sex for work.

Weinstein was fired from the Weinstein Company Sunday after he was previously placed on suspension Oct. 6.