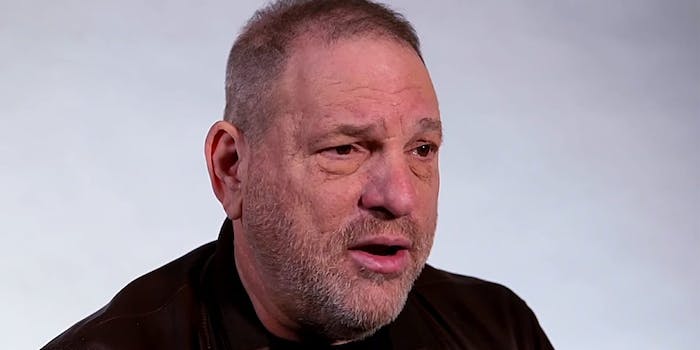 He was also caught on tape admitting to groping a woman.

On Tuesday, the New Yorker published a piece detailing even more allegations against Weinstein, including audio in which he admits to groping a woman. Ronan Farrow spoke with 13 women who claim that the Hollywood producer harassed them, made inappropriate contact with them, of forced himself on them at some point over the last 20 years.

Argento, daughter of famed horror director Dario Argento, later went on the direct a 2000 movie called Scarlet Diva. In one scene a male character invites her into his hotel room and asks for a massage—a Weinstein tactic recounted by several women in the New Yorker piece and last week’s New York Times article.

Actress Mira Sorvino recounted how in 1995, when she was promoting The Mighty Aphrodite, for which she won an Oscar, Weinstein invited her to his hotel room: “He started massaging my shoulders, which made me very uncomfortable, and then tried to get more physical, sort of chasing me around.” Sorvino left the room and when Weinstein came to her apartment weeks later in New York City to go over marketing ideas, she got him to leave by saying her boyfriend was on his way. She says this affected her career: “I definitely felt iced out and that my rejection of Harvey had something to do with it.”

The story also includes audio of a 2015 conversation between Weinstein and Ambra Battilana Gutierrez, as part of an NYPD sting operation. Gutierrez had met with Weinstein to go over her modeling portfolio and claims that during the meeting Weinstein lunged at her and groped her breast. She reported this to the NYPD; the next day, outfitted with a wire, she met Weinstein at the Tribeca Grand Hotel.

Warning: The conversation is very disturbing.

Weinstein, in conversation with Gutierrez, admits to groping her. Here’s the audio: https://t.co/zSQbK5NV0c pic.twitter.com/vmrrSUp43w

Soon after, Gutierrez started seeing negative items in the press about her past. After two weeks of investigation, the D.A.’s office declined to file charges against Weinstein.

On Sunday, Weinstein was fired from the Weinstein Company. He continues to deny the allegations.