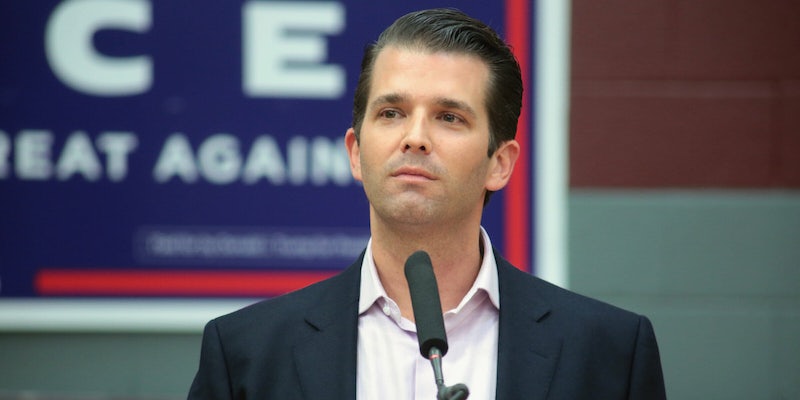 'The bias against @realDonaldTrump is now so obvious they have simply given up hiding it.'

Oprah Winfrey won the adulation of millions yet again with her rousing acceptance speech for the Cecil B. DeMille lifetime achievement award at last night’s Golden Globes. Using her platform to reference the #MeToo movement and educate viewers about landmark civil rights activists, Winfrey prompted fans to petition for her 2020 presidential run. NBC even tweeted a since-deleted GIF of the star with the caption, “Nothing but respect for OUR future president.”

But Donald Trump Jr. wasn’t having it.

The president’s son retweeted NBC’s tweet and used it as a vehicle to rail against the media. “The bias against @realDonaldTrump is now so obvious they have simply given up hiding it,” he bemoaned. “Americans see the truth in job #s & in their wallets!”

In case anyone had any doubts about where the media stands this should take care of it. The bias against @realDonaldTrump is now so obvious they have simply given up hiding it.

Can you trust anything they say at this point?

Americans see the truth in job #s & in their wallets! https://t.co/uu4KbW82UO

NBC issued a statement via Twitter Monday morning, claiming the original Winfrey tweet was “sent by a third party agency.” The network claimed it was “in reference to a joke made during [Seth Meyers’ opening] monologue and not meant to be a political statement.”

Yesterday a tweet about the Golden Globes and Oprah Winfrey was sent by a third party agency for NBC Entertainment in real time during the broadcast. It is in reference to a joke made during the monologue and not meant to be a political statement. We have since removed the tweet.

Even if NBC was just riding the coattails of the “nothing by respect for my president” meme—and even if Winfrey is “actively thinking” about a 2020 presidential run—the network definitely could’ve done without the messy endorsement. But if she does choose to run, she may face less opposition than expected: In his 2000 book The America We Deserve, Trump confessed Winfrey would have been his ideal vice-presidential candidate.