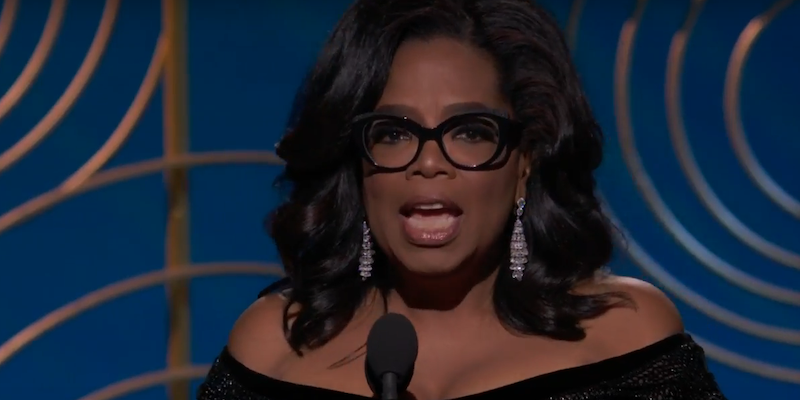 Her speech at the Golden Globes has been praised.

Oprah Winfrey is “actively thinking” about running for president, according to a new report.

CNN reports that friends close to the star say she is considering running in the 2020 presidential election. The friends say Winfrey has thought about a presidential bid for many months, but no decision has been made.

The idea of Winfrey running for president has been rumored for months, but speculation was fueled on Sunday night after her acceptance speech for the Cecil B. DeMille award at the Golden Globes.

In June, Winfrey told the Hollywood Reporter that she would “never run” for public office, but several months later she retweeted a column that argued she would be the Democrats “best chance” to challenge President Donald Trump in 2020, adding: “Thanks for your VOTE of confidence!”

In 2000, when Trump considered running for president, he said his “first choice” to be his vice president would have been Winfrey.

During her acceptance speech on Sunday night, many thought parts of it could have doubled as a campaign speech.

“I’ve interviewed and portrayed people who’ve withstood some of the ugliest things life can throw at you, but the one quality all of them seem to share is an ability to maintain hope for a brighter morning, even during our darkest nights,” she said. “So I want all the girls watching here, now, to know that a new day is on the horizon! And when that new day finally dawns, it will be because of a lot of magnificent women, many of whom are right here in this room tonight, and some pretty phenomenal men, fighting hard to make sure that they become the leaders who take us to the time when nobody ever has to say ‘Me too’ again.”

Winfrey campaigned for former President Barack Obama in 2008 and endorsed Hillary Clinton in 2016.

You can read CNN’s report here.