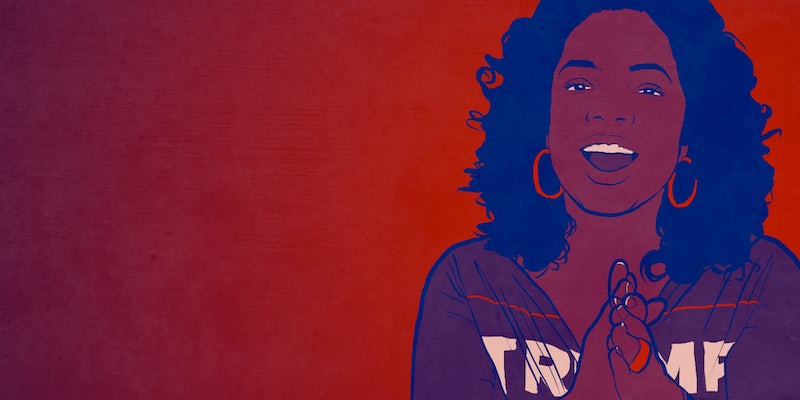 Real-estate heir and former reality-TV star Donald Trump is now the Republican Party’s presumptive presidential nominee. The next step in Trump’s quest to emblazon his name on the White House in giant gold letters involves picking a running mate.

Who on Earth will he pick?

Choosing a running mate is difficult. Some vice-presidential selections are done out of a desire to unify the party after a fractious battle for the nomination. Others aim to shore-up key constituencies for the general election or bring in key inside-the-beltway experience with an eye toward governing once the election is over. Once in a while, you just want a vice president who knows how to shoot wolves with a rife while riding in a helicopter.

“Oprah never forgets what is important, and she never stops encouraging Americans to reach for the stars.”

If Trump has his druthers, it won’t be any of those people. We know this because, 16 years ago, Trump was very clear about his ideal vice-presidential pick: Oprah Winfrey.

In 2000, Trump was toying with the idea of running for president on the Reform Party ticket. He eventually abandoned the idea, but not before releasing a book full of public policy proposals called The America We Deserve.

The America We Deserve is a profoundly odd document. It’s a stream-of-conscious whirlwind of free-associative self-aggrandizement and policy proposals that swing violently from one side of the ideological spectrum to the other. He calls for harsh crackdowns on criminals and teachers unions, while also advocating for the single largest tax hike in American history. When the Daily Dot asked tax policy experts from both sides of the aisle what they thought about Trump’s proposed $5.7 trillion tax increase aimed exclusively at the wealthy, they all said it was completely unrealistic and betrayed a fundamental ignorance about how the country functions at a macro-economic level.

Other ideas put forward in Trump’s book are decidedly less controversial. For example, that Winfrey is a national treasure.

“I’m not going to list all the good things Oprah has done to make this country better, but one does stand out in my mind, especially since I’ve been thinking about educations issues for this book,” Trump wrote, listing her among the country’s greatest individual success stories like Bill Gates and Madonna. “Oprah has inspired millions of young women to get an educations and improve their lives.”

Trump goes on to cheer Oprah as “a literary kingmaker and queenmaker” who catapults “authors featured by her book club” to “the bestseller list.” These qualities, Trump wrote, are what make Oprah his ideal running mate.

“In early October I announced formation of a committee to explore a run for the presidency. At the time I announced that my first choice for vice president would be Oprah Winfrey,” he wrote. “Again the political elites chortled—Oprah Winfrey! They just don’t understand how many Americans respect and admire Oprah for her intelligence and caring. She has provided inspiration for millions of women to improve their lives, go back to school, learn to read, and take responsibility for themselves.

“There are many, many Americans who are fully dedicated to helping fellow citizens improve their minds. God bless all of them. And I think all of them will agree that Oprah is on the side of angels, and may even be an angel herself,” he continued. “Oprah exemplifies the leadership I’m interested in—she doesn’t strike poses. Instead she poses striking questions: Are you doing your best? If not, why not?”

At the time, representatives from Winfrey’s camp politely declined Trump’s offer. “Oprah is not running … at this point in time,” a spokesperson told the New York Post in a 1999 article about Trump’s presidential ambitions.

The Winfrey speculation was rampant enough to merit significant media analysis. “We’ve no doubt Ms. Winfrey could offer many fine traits as vice president—chief among them the athletic ability to wrest Mr. Trump’s hand away from The Button—yet, we like to think the office requires slightly different skills from those of talk-show host,” argued an op-ed in the Newark Star-Ledger.

Considering a recent Gallup poll showed 70 percent of women hold an unfavorable view of Trump, gaining access to Winfrey’s predominantly female fan base would be a boon to his general election campaign. However, considering how Winfrey stumped for Barack Obama during the 2008 election cycle and then raised funds for his reelection effort four years later, it seems unlikely she’ll join in on Trump’s populist, anti-Obama campaign.

As he wrote in his book, “Oprah never forgets what is important, and she never stops encouraging Americans to reach for the stars.”