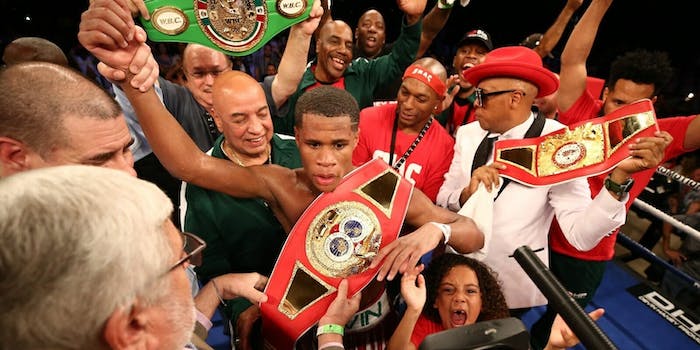 How to live stream Devin Haney vs. Antonio Moran on DAZN

Can Haney continue his monumental rise in the rankings?

After introducing himself to U.S. audiences on Showtime during his last three fights, Devin Haney—one of the most exciting American boxing prospects—makes his DAZN debut on Saturday versus Antonio Moran.

Haney vs. Moran probably won’t be ultra-competitive, but it’s certainly worth watching. Haney is a lightweight prospect with plenty of skills who thinks he’s ready to win a world title.

“Devin Haney is a superstar—no two ways about it,” promoter Eddie Hearn, whose Matchroom Boxing company recently signed Haney (which is why Haney is now fighting on DAZN). “At just 20 years old he has already racked up 21 victories, untouched as a pro, and has become one of the most talked about fighters in America. The big fights are right in front of him. He is ready for anyone and we look forward to a wonderful partnership together.”

It starts on Saturday. Here’s everything you need to know to live stream the Haney vs. Moran fight on DAZN.

The only legal way to watch Haney vs. Moran in the U.S. is to stream it on DAZN. DAZN recently got rid of its one-month free trial, but the streaming service is still one of the best values in boxing. You can watch established fighters like Canelo Alvarez, Gennady Golovkin, and Anthony Joshua (three of the most popular boxers in the world) by paying $19.99 per month or $99.99 for the entire year. You can also watch potential rising stars like Haney and Regis Prograis as well.

DAZN has been available in the U.S. since last September, and with more than 100 fight cards streamed per year, it’s been a boon for boxing and MMA fans. Last week, DAZN aired two semifinals of the World Boxing Super Series—both turned out to be fun matches to watch—and on June 1, it’ll air the Joshua vs. Andy Ruiz heavyweight championship. By its own admission,  DAZN is doing its best to try to kill the longtime boxing PPV model.

Devin Haney vs. Antonio Moran: Why it matters

When Haney signed his deal with Matchroom Boxing, Haney and his promoter believed he would get a shot at one of the vacant 135-pound titles versus England’s Luke Campbell. Instead, the sanctioning body who owns that belt gave that title shot to Vasiliy Lomachenko, my No. 1 pound for pound fighter in the world. That means Haney had to find another opponent for a match not involving a world title.

That’s where Moran, who is a 14/1 underdog, enters the story. Moran (24-3, 17 knockouts) has beaten mostly C- and D-level fighters, and the one time he fought an elite boxer, Moran lost a close unanimous decision to Jose Pedraza last June. Beating Haney would be surprising to boxing observers, but still, Moran seems confident.

“I feel great coming into this fight, I’ve had two months to prepare for this showdown,” he said, via Fight News. “My experience will play a huge factor in this fight. I have fought on the biggest stage and proven I belong at the top. I am by far the best opponent Haney has faced.”

That’s debatable. In the past year, Haney (21-0, 13 KOs) has beaten solid opponents like Mason Menard, former world title challenger Juan Carlos Burgos, and the previously undefeated Xolisani Ndongeni. Haney said nothing will stop him from becoming one of the best fighters on the planet.

“I am only 20 years old. The other lightweights out there better catch me now because I am only going to get stronger and faster” Haney told Boxing Scene. “Getting the fights I want has been a challenge. A lot of guys have turned me down, saying there’s no point or not making enough money, so that’s been a real challenge. It’s me vs. me. When I am in the gym I am so far ahead of a lot of guys that it’s me challenging myself, pushing myself, seeing how far I can go rather than seeing how far I can outrun another guy—how fast can I push myself?”

Maybe Moran can be the one to push Haney a little bit.