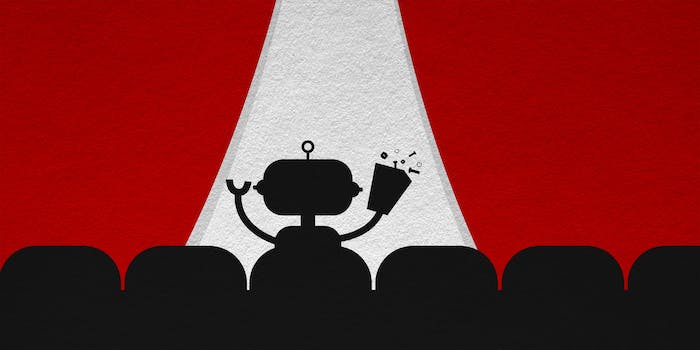 Why films like ‘Office Christmas Party’ are deploying chatbots

Bots want to tell us about movies, but how far can the conversation go?

During SXSW 2015, many Tinder users matched with a woman they assumed was real. They had conversations her, which seemed to flow naturally. But she was a chatbot, promoting the Alex Garland film Ex Machina.

Some who fell for it called it deceptive, but it also opened up what movie promotion could be, and how deeply bots could engage with fans. Chatbots have already infiltrated social media, shopping, small business, advertising, music festivals, and Werner Herzog. But using them for film promotion is something that’s still evolving—the hope is that if fans can interact with some human, relatable aspect of a show or film, they’ll be more invested.

Earlier this year, Paramount Pictures experimented with a Kik chatbot to promote Teenage Mutant Ninja Turtles: Out of the Shadows and a Star Trek Skype bot tie-in. Kik also hosted campaigns for Insidious: Chapter 3, which let you text with Quinn, the film’s haunted main character; Now You See Me 2; and Maze Runner: The Scorch Trials. Horror film Lights Out used chatbots to guide fans through the physical experience of being scared. Zooptopia used a Facebook Messenger chatbot to keep fans engaged, as did Unfriended. In September, HBO debuted a chatbot to promote Westworld. Netflix has a recommendation chatbot.

Russell Ward, president of Massively, the Canadian company behind the campaign, says they learned quite a bit from the experience, including how to deal with people trying to “break” the bot with suggestive comments, swearing, or jokes.

“Being in character all the time is so important [and] having a real copywriter at the core of the experience… is absolutely imperative,” he tells the Daily Dot.

As for the future of this kind of promotion, Ward says they have even more films lined up: “I think what we’ve validated is that people do want to engage with story and with character.”

With 2016’s Lights Out, messaging platform QwipIt was able to engage with a physical space as well as the digital.

You guys – it's alive…check out our bot that is running the @LightsOutMovie Scare Booth. https://t.co/Rwq7yA8Yd6

In a piece for Medium, QwipIt’s Sam Hager wrote:

As far as we know, this was the first time a chatbot had been used to not only augment a physical promotion of a movie, but also provide attribution information about the effect the promotion had.

QwipIt’s Chief Operating Officer Amanda Proctor says they wanted a chatbot that wasn’t “just regurgitating content.” The bot pulled double duty in physical Scare Booths in New York and L.A., as well as on the Lights Out Facebook page. With the latter, they ended up providing a customer service experience; many people were messaging the page for info about the film but not getting a response, something the bot supplied. Fifty-nine percent of users found the bot through the Facebook page.

Office Christmas Party, an ensemble comedy aimed at the Hangover or Hot Tub Time Machine crowd that hits theaters Friday, is the latest film to use chatbots. Or rather, Genies.

Blend CEO Akash Nigam describes it as a “millennial messaging platform” that provides users with “Genies for literally everything in life.” Blend has rebranded the chatbot as a more animated and millennial-friendly “Genie” in an effort to distinguish itself from the chatbots of yore.

“The chatbot [was] made for the insulated tech community,” he says. “[With] Genies we’re trying to make it for the mainstream user.” 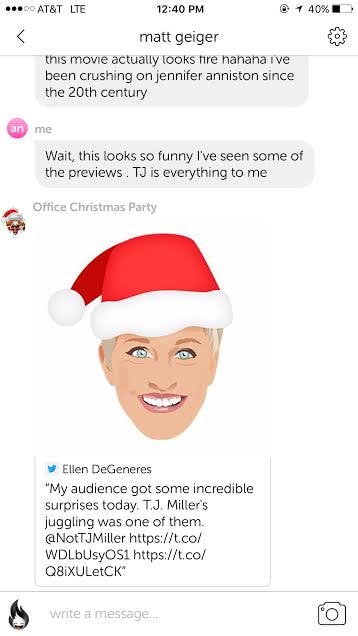 Nigam says the average age on Blend is 22, and since Hollywood has shown it doesn’t really know what millennials want, messaging and mobile apps are the new bridge. But Kik and Facebook have their flaws, so smaller companies are now even more well-placed to elbow in. Blend wants to “beat everybody to the punch” with its content, and Nigam says within the first 10 minutes they know if certain content will go viral, via a somewhat erotic-sounding technology known as the “Viral Throttler.”

The chatbot as human-like storyteller is a compelling experiment, and while many bots just act as a guide (until they turn on us), it will be interesting to see how deep the conversation can go, and how they change how we watch TV and film.