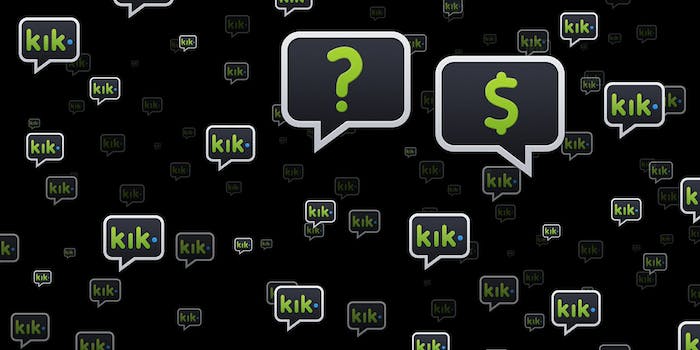 How Kik became the king of sketchy messaging apps

It’s a phrase uttered just as often in high school hallways as posted in Instagram comments or Tinder profiles. With over 240 million registered users, Kik is among the most popular messaging apps for teens and millennials alongside Snapchat. But there’s a dark side to it as well: The app has seemingly become the go-to chat service for people dealing in illegal trades or sharing adult content.

On Kik, pronounced “kick,” people rely on usernames instead of phone numbers to message each other, and they can delete and create usernames as frequently as they want. And while it’s a fast and customizable app that does a lot more than just provide a texting alternative, it’s also an ideal app for people whose privacy is tantamount to their business.

When I set up my Kik account, I tweeted my username and told people to “Kik me.” That turned out to be a huge mistake. The first two messages I received were pictures of strangers’ penises. I immediately deleted the public tweet and changed my Kik username. The photos were off-putting and unwanted, and I realized I’d inadvertently tweeted a hashtag often used to invite sexting.

If you search Twitter or Instagram for the hashtag #kikme, you’ll find posts that include naked photos and the promise of sexts, or are associated with drug paraphernalia. Other hashtags that are shared alongside Kik usernames include #kush4sale, #bud4sale, and other slang terms for weed or party drugs. Instagram hides almost all of the over 14 million posts with #kikme from search. When you try and look for them, Instagram alerts you that the posts are hidden due to feedback from the community.

Though Instagram doesn’t block #kikme, it restricts searchable images to “Top Posts,” or the top 36 images associated with the hashtag. According to Instagram, it only restricts hashtags when they’re consistently shared with images or videos that violate its community guidelines, and the #kikme hashtag was regularly used to share nudity and pornographic content.

When I set up my Kik account, I tweeted my username and told people to “Kik me.” That turned out to be a huge mistake.

Kik is an ideal app for scheduling transactions, especially drugs, because no personal information is exchanged unless you explicitly want it to be. Kik’s privacy policy states that text conversations are only stored in the users’ devices, and the company never has access to the information, even if law enforcement requests it. Photo and video, however, might be made available to law enforcement but are not accessible to Kik’s trust and safety team; they’re automatically deleted in a “short period of time.”

Drug dealers have used Instagram for years to advertise their product, and it’s possible to set up burner accounts if you’ve got some technical know-how. But law enforcement monitors the public social network for illegal activity, and some public Instagram posts have led to major arrests, including the largest New York City gun bust two years ago—so taking the conversation to a more anonymous network makes sense.

On Internet forums like Grasscity, a website for people who partake in the cannabis lifestyle, some posts encourage using Kik over traditional text messaging. Dealers can post a picture of what they’re selling on Instagram or other forums, and then connect with people via Kik instead of handing out their phone numbers.

According to a study compiled by the Coalition Against Drug Abuse, almost half of drug dealers on Instagram use Kik as a method of contact for facilitating sales, compared to just 26 percent who use standard text messaging. If the photo isn’t shared with the #kikme hashtag, chances are the Kik username can be found in the user’s profile or comments on the photo.

I reached out to 13 people whose Kik usernames are associated with drugs or other paraphernalia on Instagram, Twitter, and drug forums, and only one spoke with me after I identified myself as a reporter. I discovered this person on Instagram by searching a number of different marijuana hashtags and found a Kik username associated with a post. He spoke on the condition of anonymity and clarified that he doesn’t sell drugs, just pipes, and other glassware that could be used for smoking weed, dabbing, or simply collecting.

“It’s all hashtags,” he told the Daily Dot in a conversation over Kik. “If I have a piece of glass for sale and someone is in the market, they will find me. The payment is usually PayPal. If I’m buying glass I absolutely want to see their Instagram to make sure they look legitimate and a lot of it is just trust and hoping the universe takes care of the good people in it. The glass community is pretty tight-knit, and most people wouldn’t steal because they have a respect for glass collectors. Thefts do happen, but most glass collectors aren’t thieves and work hard for the glass they do have.”

“The way we look at it is, we’ve built this great chat at it’s core, and there are all these opportunities to put great services to put on top of that.”

Kik knows its platform is used for dealing drugs and is a favorite for sexters, but founder and CEO Ted Livingston isn’t particularly concerned with that content; he’s too focused on monetizing the application and turning it into a one-stop-shop for everything from on-demand meal ordering to chatting with brands. The app out of Canada is on a mission to become the “WeChat of the West.”

“[Adult content] is definitely something we think about a lot and try to do a lot to add features to give people more control and more safety over what they’re doing,” Livingston said in an interview with the Daily Dot. “But at the end of the day, your Kik username really is your phone number with one slight tweak to it, where if you give it away, you can take it back.”

Teens have grown up in a mobile-first world, and as they get older, Kik predicts they will want to use platforms for more than just texting with friends—they’ll want to buy things in a fast, streamlined way. As users cobble together distribution for goods and services using Kik as the communications platform, the company is working on turning itself into a much more legitimate marketplace.

“The way we look at it is, we’ve built this great chat at it’s core, and there are all these opportunities to put great services to put on top of that,” Livingston said. “What’s a good, easy way to order food? Or what’s a fun way to buy clothes? What’s a compelling way to discover fun games and play them with your friends? There are all these services we can deliver on top of that chat experience. The thing we’ve been trying to figure out is what’s the best way for that to work.”

Burkett St-Jacques is the creator of SextWithMe.net, a forum used to connect anonymous Kik and Snapchat users. St-Jacques, a computer programmer in Melbourne, Australia, started the site less than a year ago. It’s targeted at a young demographic of mobile app users. He says that although Snapchat might have a larger userbase, Kik is more prominent on his site.

“The application is not linked to your phone number, so your username becomes the key to finding people, which I think is quite attractive from a privacy perspective,” St-Jacques told the Daily Dot. Because you can use Kik without a mobile SIM card, it opens up the app to tablet users, too.

Eighty percent of SextWithMe visitors come from mobile. But like any Internet forum, and perhaps especially anonymous sites that facilitate lascivious behavior, SextWithMe has its fair share of bots and people who take advantage of all that sexting thirst. In a post on GitBook, someone claiming to be St-Jacques described how people can rip photos from Reddit, share them to the free photo site Imgur, use a link shortener called GCa.sh, and post the photos to the forums to make money off of link clicks. It’s a how-to on using sexting forums to catfish strangers for cash. St-Jacques said he wasn’t aware of the shortlink advertising; he used a number of companies to optimize his site for search, he said, and thinks one of them was responsible for the post to drive spam.

“We don’t verify the accounts—I’ve had the idea before, but think it’s probably a future enhancement to add to the site,” he said. “Fake accounts you get all the time and comes with the territory. It would be great if I do get around to account verification one day, [it] would mitigate a lot of these issues. Trolling is not so common, as SextWithMe.net is mostly used for finding a username for Kik or Snapchat, you’ll likely leave the website and launch the app and continue from there.”

Despite the threat of sexbots and fake accounts, people don’t shy away from exposing themselves to strangers on Kik.

Snapchat is much more of a broadcast app, enabling people to take photos and videos to share with public followers for 24 hours, but Kik’s private nature means content isn’t policed by the company.

The app, like many other social networks, has some parents concerned. It’s impossible to see who your kids are texting, and people they’re chatting with might be lying. In Michigan earlier this year, one sex offender described the ways people can use Kik to target kids by pretending to be someone they aren’t. And there have been a number of cases in which men have been convicted of soliciting sex and targeting young girls using the application. With each new cyberbulling, stalking, or sexual predator case involving Kik, law enforcement warns parents about the app. But, like any other social platform, there’s little people can do beyond educating kids about online safety.

The app is rated ages 17 and up, yet young people are among the most voracious users, with the under-25 crowd making up more than 70 percent of the app’s userbase. And according to the company, 40 percent of U.S. teens are on Kik. Snapchat is much more of a broadcast app, enabling people to take photos and videos to share with public followers for 24 hours, but Kik’s private nature means content isn’t policed by the company. Livingston said that moderating a chat platform feels like an invasion of privacy.

“A Kik is like a phone number, it just lets you talk to a bunch of people and block the ones you don’t like. But if you’re posting it publicly for anyone to see, yeah you’re going to get a lot of different people messaging you, some you’re not going to like,” Livingston said. “I think people learn this overtime and don’t post [usernames] completely publicly. The people who don’t want to use Kik for sexting, which is the overwhelming majority, stop doing it.”

As Kik figures out new ways of engaging people and builds the underlying operating system for things like games and other services, #kikme remains the universal signal for taking public content to a much more private chat.