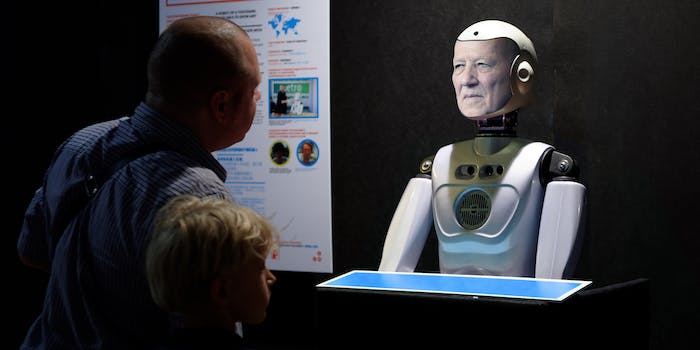 I asked a Werner Herzog chatbot about his new volcano doc, Into the Inferno. All it wanted me to do was read.

WernerBot, created by Van Gould and Chris Sheldon, was launched back in May, before the documentarian released his internet doc Lo and Behold or recent Netflix debut Into the Inferno. Messaging with a Herzog chatbot is certainly a surreal task, but what should one make of the on-brand response, “Everyone should pull a boat over a mountain once in his life, and everyone should read”?

Gould says the idea for the Facebook chatbot came from a real encounter with the director last year: After admitting to Herzog that he didn’t read as much as he should, “Werner stared me in the eyes and said, ‘Read, read, read.'”

He survived direct eye contact, and since launching WernerBot has received more than 15,000 messages, according to Gould.

“It’s the only chatbot that wants you to stop chatting and start reading,” he says.

I tried a topical question first. 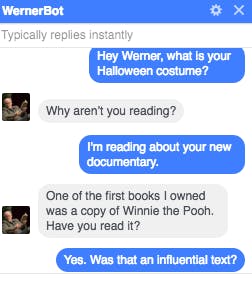 I tried to get more of a pop-culture pulse. 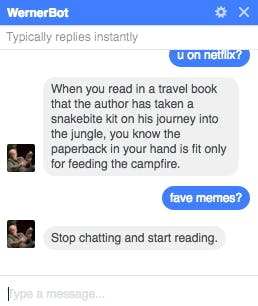 “It seems natural that a Werner Herzog chatbot would want you to read instead of chatting with it,” says Gould.

While Herzog has not officially endorsed the bot, Gould points out that he’s at least acknowledged his online clones. In a 2011 interview Herzog said, “There are a dozen fake Herzogs posing as me on Twitter and Facebook. I don’t mind—I look at them as my unpaid bodyguards.”

WernerBot also recommended “poets of the baroque epoch” and Rabelais’ Gargantua and Pantagruel, “which is wonderfully debased, wild storytelling.”