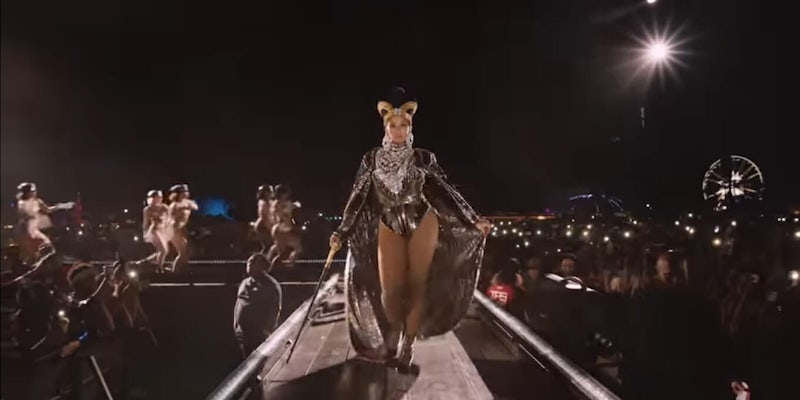 'Beyoncé dropped an incredible documentary, a new album and the full unredacted Mueller report in the middle of the night.'

Queen Bey has done it again.

The reigning monarch of music dropped yet another surprise album early Wednesday. Beyoncé has long dazzled fans with her surprise releases, and this one immortalizes the time she turned out the most high-profile music festival in pop. This time, the secret (live) album drop aligns perfectly with the release of her Netflix documentary Homecoming.

The surprise album—also titled Homecoming—features Beyoncé’s performance at last year’s Coachella Valley Music and Arts Festival. The event is fondly referred to by many as Beychella. Her jaw-dropping performance employed the use of an incredible collection of backup dancers and a fully equipped marching band. As the first Black woman to ever headline the event, Beyoncé sought to memorialize the rich history of HBCUs, or historically Black colleges and universities.

Netflix announced the documentary—skillfully touted as “a film by Beyoncé”—in early April. The documentary aims to provide audiences with an in-depth look not only at the show-stopping performance at Beychella, but also the creative process behind it.

The album separates more than two hours of spectacular music into 40 tracks. It is packed with original music, a few surprise solo tracks, and even those unexpected Destiny’s Child songs. The album is available through all of the major streaming platforms, including Apple Music and Spotify.

Unexpecting fans were delighted to hear of not one, but two commemorations of Beyoncé’s spectacular performance. “Only Beyoncé can get a number 1 album full of old music at 3 am during the middle of the week,” one Twitter user wrote.

Beyoncé after dropping an album and a Netflix documentary on the same day #BeyoncéHomecoming pic.twitter.com/AjmYzU7aGj

what a beautiful day to be alive #BeyonceHomecoming pic.twitter.com/F1ULGCpllp

If you were asleep, Beyoncé dropped an incredible documentary, a new album and the full unredacted Mueller report in the middle of the night

The album, not to mention the documentary, had some people fondly recalling their days in college.

Thanks to their queen, the Beyhive will have no shortage of streaming entertainment to geek over this spring.