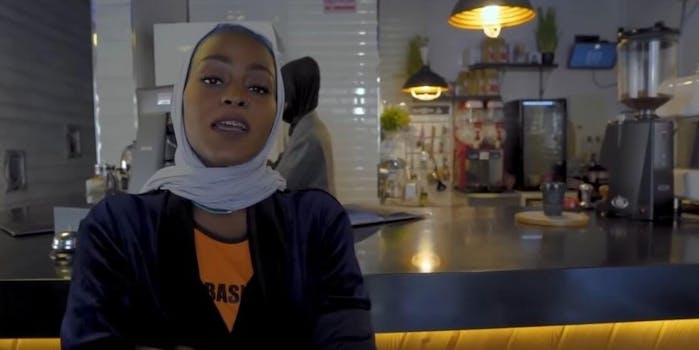 Mecca's governor is not happy.

Saudi Arabian officials ordered rapper Ayasel Slay to be arrested for producing a YouTube music video called “Girl From Mecca” that they said “offends the customs and traditions” of that city.

As noted by Mashable, Slay’s rap video, a.k.a. “Bint Mecca,” promotes the strength and beauty of women who hail from Mecca, a holy site for the Muslim religion where the Prophet Muhammad was born and the city where that religion’s followers pilgrimage ever year.

“A Mecca girl is all you need/Don’t upset her, she will hurt you,” Slay raps, via Al Jazeera. “With her, you can complete the Sunna [get married]/Your life with her will become Paradise.”

The original video and Slay’s channels have been removed from YouTube—it’s unclear why—but other mirror videos have popped up in the meantime.

While many online believe the song is empowering for Muslim women—the video features young females dancing and mouthing the lyrics—the governor of Mecca was outraged by the music video and ordered Slay to be detained.

“Prince Khalid bin Faisal of Mecca has ordered the arrest of those responsible for the Bint Mecca rap song, which offends the customs and traditions of the people of Mecca and contradicts the identity and traditions of its esteemed population,” the @makkahregion tweet said.

Some decried what they saw as disrespect to the religion—and some tweets had racist undertones, particularly because of Slay’s African roots.

“Immediate deportation is the answer, in addition to holding every foreigner who claims to be from Mecca accountable,” one Twitter user wrote, via Al Jazeera.

But another defended Slay, writing, “Saudis are saying that the singer is Black and can’t be from Mecca, as if Mecca is known for its blond-haired and blue-eyed women.”

Amnesty International has previously described Saudi Arabian citizens as in the “grip of a sweeping crackdown against critics of the government.”