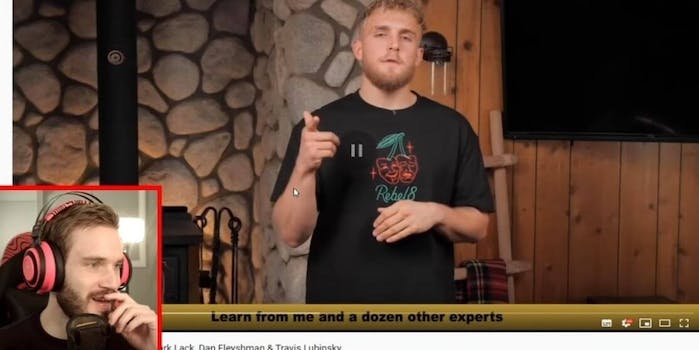 PewDiePie does not hold back.

It did not take long for PewDiePie, after returning from his 37-day YouTube hiatus, to focus on an old target: Jake Paul.

PewDiePie—who in 2019 blasted Paul for promoting the MysteryBrand site to his young followers—called Paul “that little snake” and sarcastically said, “Yes, Jake Paul is the person I look at when I envision financial freedom.”

Paul introduced his newest idea earlier this month by saying he and other experts would give you all the advice you need to become financially independent if you pay him $20 per month. He said the American education system is worthless and doesn’t teach you what you really need to know to become financially successful as an adult.

“I’m creating a movement for everyone who wants to take life into their own hands and learn real life skills from actual professionals,” Paul tweeted.

That led PewDiePie to mock Paul.

“You can become financially free by paying me,” PewDiePie said. “Trust me. You don’t understand. It starts by paying me money. Ignore all this endless content on YouTube with actual legitimate people talking about financial advice that actually has some legitimacy and some weight to them. What we need to do is pay Jake Paul.”

In PewDiePie’s vlog—which was the No. 2 trending video on YouTube on Monday morning—he signs up for Paul’s website, pokes fun at the content and features, and laughs at those who seem to believe in Paul and his newest idea.

But then he got serious with his major points against Paul.

“It’s so disingenuous to put forth that this is what you are passionate about when, in reality, the only thing Jake Paul has shown himself to be passionate about is making money,” PewDiePie said. “Jake Paul is the kind of celebrity that doesn’t have any real value. All they do is project this image of wealth and now he’s monetizing that to get more money. He’s stuck in this loop. You can replace Jake Paul with anything or anyone, and it wouldn’t make a difference …

“The message is fine. I agree that so much of the school system is outdated but what the fuck is Jake Paul going to get teach you about this? … It’s complete bullshit, there’s no point in saying it.”

PewDiePie’s video is harsh, and as he points out in his video, it doesn’t seem like the Financial Freedom Movement is gaining much online traction. But then again, Paul got $20 out of PewDiePie’s wallet, so perhaps he can call that a small victory.