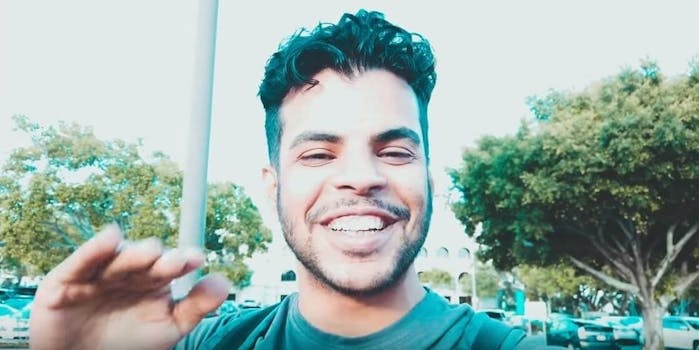 This YouTuber claims the Saudi government plotted to kidnap him on U.S. soil

The plot reportedly included his father.

A YouTuber with about 200,000 subscribers said the Saudi Arabian government tried to kidnap him on U.S. soil but that the plot was thwarted by the FBI, he told the Daily Beast.

Abdulrahman Almutairi has been critical of the Saudi government and its policies, particularly in the wake of the murder of Washington Post journalist Jamal Khashoggi. Almutairi is a 27-year-old comedian who attended school at the University of San Diego, but there was nothing funny about what he said was an attempted kidnapping plot that would have ended in his own death.

“The Saudi government realized I was a threat,” Almutairi told the Daily Beast. “If I go back to Saudi Arabia, I’ll be killed in the airport.”

According to the website, an unknown man traveled with Almutairi’s father on a flight from Saudi Arabia to take Almutairi against his will and bring him back to that country.

It’s another troubling story for Saudi Arabia and Crown Prince Mohammad bin Salman, who this week was accused of hacking into Amazon CEO Jeff Bezos’ phone by sending him a malicious link through WhatsApp. Originally, Almutairi was a supporter of MBS, and when Khashoggi was killed, he didn’t believe the Saudi leader could have had anything to do with it.

But as more and more news broke that MBS was involved, Almutairi turned on him and used his two YouTube channels to levy criticism at the Saudi government. That prompted others to send him death threats.

He said he’s received phone calls and text messages imploring him to come home to Saudi Arabia for a so-called family reunion—clearly Almutairi thinks that would end badly for him. He said the FBI informed him that his father and an unknown man were nabbed by the federal agents at the Los Angeles airport en route to San Diego and then sent the pair home.

Even though Almutairi talks about using comedy to send positive messages to the Saudi community and to empower its younger population, he said he’s done with his criticism.

“My criticism against the government won’t do anything. It’ll just turn more people against me,” Almutairi told the Daily Beast. “I’m trying not to use the term ‘political dissident.’ I want to influence my country for the better.”