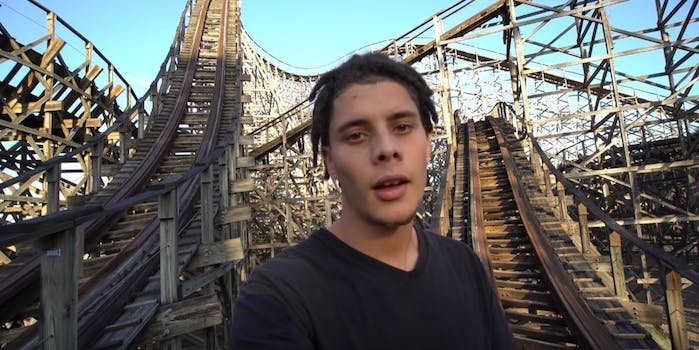 The mouse is not happy.

Matthew St. Cyr posts YouTube videos of himself exploring abandoned rides and behind-the-scenes features at Disney World and other amusement parks. He has a modest YouTube following of about 28,000 subscribers, and he often compels tens of thousands of people to click on his content.

Exploring the unlit side of the happiest place on earth is entertaining for those who are watching St. Cyr on YouTube, but that doesn’t mean Disney World or YouTube thinks his vlogs are appropriate.

According to Click Orlando, YouTube has demonetized St. Cyr’s channel, meaning ads won’t be shown on his content and he can’t make money off his videos.

“I make a living out of it,” St. Cyr, who also said he receives donations to stay afloat, told the TV station. “I’ve got to put food on the table somehow.”

According to reports, St. Cyr’s Patreon page has also been suspended. In both platform’s cases, they consider St. Cyr’s content to be showing illegal acts—in other words, alleged trespassing. Click Orlando reported that St. Cyr has been arrested twice for trespassing, once at Disney World and once at a power plant in Titusville, Florida, but he said he takes pride in forcing the theme parks to tighten their security.

He also posted a video exploring the work area of the Stitch’s Great Escape attraction at Disney World.

St. Cyr has even expanded beyond Disney, posting behind-the-scenes videos from a Universal water park and Busch Gardens.

Neither Universal nor Disney are in favor of these types of vlogs.

“This is dangerous, reckless and unlawful behavior and we will not tolerate it,” a Universal Orlando spokesperson told Click Orlando. “We are taking this very seriously and we are working with the Orlando Police Department on this.”

Said Disney: “In any case where we find someone being intentionally reckless and promoting unsafe acts, we will bring in law enforcement to trespass them so they will no longer be allowed to come back to Walt Disney World.”

In response to his Patreon punishment, St. Cyr tweeted that he had an alternative way of making money on a new platform, SubscribeStar.