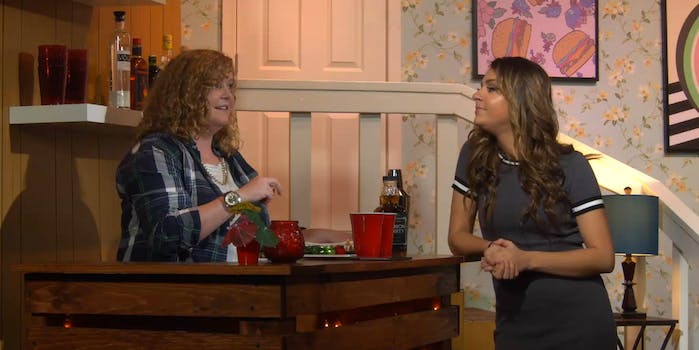 Behind ‘Apologies in Advance,’ the talk show for internet celebs

Andrea Russett wanted her Fullscreen talk show to be like 'Ellen.'

In the first episode of Apologies in Advance, Andrea Russett’s Fullscreen talk show, she asks YouTube idol and former Our2ndLife member Trevor Moran to introduce himself: “Who are you, why are you famous?”

It’s a question that might seem blunt on a late-night talk show, but Apologies in Advance is a different kind of program. It focuses on internet personalities and is heavy on the drink pours and sex talk. There’s a sitcom vibe, as canned laughs and “ohhhs” are piped in, and the set is designed like a basement, complete with wood paneling and ’90s relics like Furbys.

Russett’s co-host, comedian Rachel Scanlon, plays bartender and provides the one-liners. She also openly discusses being gay. Guests are always a surprise to Russett, so “whoever walks out that door is whoever I’m talking to,” she tells the Daily Dot.

She wanted the show to have a “right before late-night” vibe, and envisioned it like The Ellen DeGeneres Show, “where she can kind of do whatever, have fun, and it’s really just one big hangout and everyone is having fun. Nothing too serious, nothing too heavy.”

So who is Russett, and why is she famous? She ascended on YouTube as a teen, and now has more than 2 million subscribers. Her first video, posted in 2009, was about Justin Bieber. She’s since cultivated a dedicated fanbase that’s engaged with her humor and honesty, across platforms like Instagram (more than 3 million followers), Twitter (more than 3.5 million), and Snapchat. She’s appeared on social media festival DigiTour and in the film Mike and Dave Need Wedding Dates.

Last year, Russett appeared in director Hannah Macpherson’s Sickhouse, which debuted via Russett’s Snapchat. The snaps gave the illusion that Russett and her friends were really trekking out to an abandoned house in the woods of California, as the movie was delivered via 10-second snaps.

“Just doing that kind of experiment on my Snapchat, it really showed how involved people are,” Russett says. “As soon as one thing happened on Snapchat, you’d see hundreds of tweets flying in.”

The gimmick proved to be a successful engagement strategy.

“A lot of people towards the end started to catch on,” she adds. “And say, ‘Oh, I think this is a live movie.’ They got to figure out the puzzle and solve the mystery, which got them even more excited to be a part of it.”

Russett’s fans are involved in the talk show, too. Apologies in Advance features a regular sex chat segment, in which Russett and her guest answer fan questions submitted via Twitter and voicemail. She says it’s important to have that conversation.

While the sex talk is largely goofy, there are some cringeworthy moments. In one interview with Sickhouse co-star Lukas Gage, he’s asked if he “pulls out” during sex. After some hesitation, he responds, “What’s a little Plan B?” as Russett facepalms. However in that same episode, when Gage misstates Scanlon’s name as “Mitchell,” she responds, “Gender is over.”

Last month, Fullscreen announced its new slate of shows, which featured mostly female creators. In an interview last summer, Fullscreen’s GM of subscription platforms Martin Keely said it has a more female-leaning viewership. Indeed it seems the platform has pivoted away from the male-helmed series, introducing Electra Woman and Dyna Girl, Zall Good with Alexis G. Zall, and Slumber Party with Alie and Georgia in the last year. As much talk as there is about sex and relationships on Apologies, there are also frank discussions about sexuality that are often missing on mainstream talk shows.

Russett wants to do more TV, and says a Sickhouse sequel could be a possibility, but she’s aiming much higher for her “dream job”: a cast member on SNL.