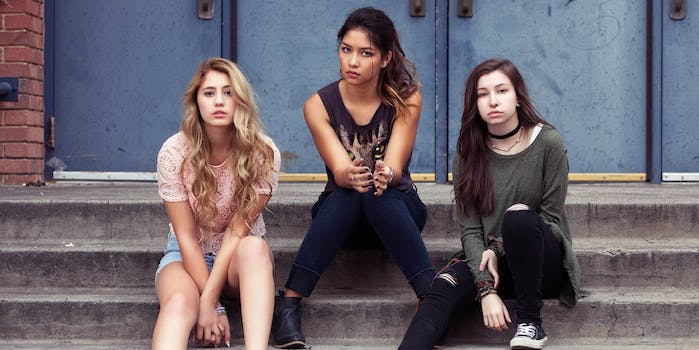 'I tagged you guys.'

Hannah Macpherson admits she’s a teenager trapped in an adult body. And she’s using this talent to create some chilling content.

Macpherson is the director of [email protected], a new weekly series airing via go90 and AwesomenessTV. Two former friends (played by Lia Marie Johnson and Lulu Antariksa) are brought back together by a series of mysterious videos posted to social media, and a troubled friend (Katelyn Nacon) who needs their help. An episode in, the intro’s tagline takes on an ominous air: “I tagged you guys.”

The 34-year-old director tells the Daily Dot she’s “fascinated with teenagers” and spends a lot of time thinking about the mobile-driven teenage experience. Social media is ever-present and valuable for communication, but Macpherson tends to focus on the “dark side” of that particular human experience. She fell down various rabbit holes of social media and wondered: Has a crime ever been committed on Vine?

Macpherson made [email protected] a visual experience: Much of the narrative on-screen action is illustrated by interactions and posts on social media. She says they took House of Cards’s on-screen textplorations “to the Nth degree. We really thought of those graphics as a character in the movie. They live in the 3D space.”

While the series has some elements of horror, it’s more a “really fun whodunit,” influenced by shows like Pretty Little Liars and The Killing more than traditional horror.

“The monster-in-the-house trope—the house is online,” she says. “I really wanted that to play out visually.”

Elsewhere in [email protected], parents either struggle to control their kids’ social media activity or are absent altogether. A concerned teacher discovers the #cutting hashtag on an Instagram-esque platform. There is a subtle sense of dread bubbling up not just from the specter of an anonymous psycho but from the harassment, stalking, and shaming so many women and young people endure online.

“The crazy thing about Snapchat is that it is an unfiltered view of the teen experience, and it disappears within 24 hours,” Macpherson says. “Teens post crazy stuff on there. I didn’t have to look far to see the cutter community online.”

But the series isn’t about bad or good parenting; Macpherson is offering a channel into what parents don’t know. “You think you have all their passwords, you don’t,” she says. “Kids download Snapchat every day and then delete it so parents don’t know.”

Other filmmakers have experimented with Snapchat for mobile horror, like the short film 3 Seconds. But there’s also been a shift in modern horror films like It Follows and The Witch, where the “final girl” is more in control of her fate. And yet, the female characters targeted in [email protected] aren’t victims, Macpherson says. “They make themselves responsible, because they’re sharing their lives. People allow themselves to be vulnerable.”

If you remove the “heightened campiness” in a lot of horror movies, she says, “you can reach people in a horror setting, then you’ll kind of go anywhere with them.”

Macpherson experimented with this idea in her recent film Sickhouse, the first movie made for Snapchat. Shot over five days, it stealthily debuted last month and tells the story of a group of friends who visit an allegedly haunted house in the woods of Southern California. YouTube star Andrea Russett’s Snapchat account was transformed into the medium for this modern-day Blair Witch Project, further blurring the line between fiction and reality. Macpherson says that while some people realized it was fake, others didn’t.

It was the first vertically shot feature film, meant to seize on the fact that teens are watching their phones all day. Shooting vertically lends itself to horror, Macpherson says. “It’s very claustrophobic.”

It helps that both casts have built-in fanbases. Lukas Gage, Claudia Sulewski, and Jc Caylen also star in [email protected], and with YouTube and Snapchat stars, Macpherson says their fans really feel like they know them, even if they aren’t playing themselves. Sickhouse snaps were viewed over 100 million times, with a director’s cut available on Vimeo. A sequel is now in the works, but Macpherson’s not involved; she’ll be starting production on [email protected] season 2 next month.

Separating herself from her teenage counterpart, Macpherson offers an appropriately chilling view of what social media potentially does to teens. “It allows a greater access to people,” but as [email protected] shows, that’s not always good.

“My theory on social media is it’s going to change, but not for the better,” she says.