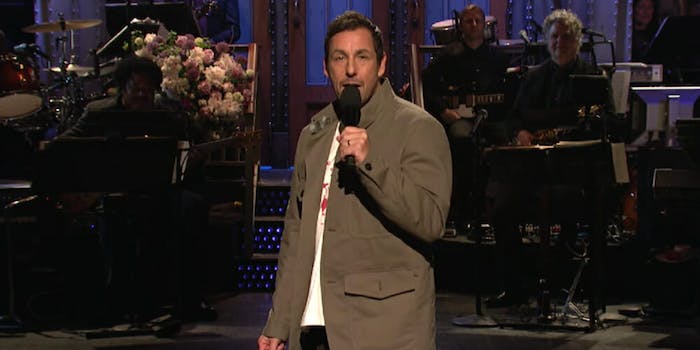 He got some surprising help, too.

Adam Sandler gave Saturday Night Live some of its most iconic characters and songs in the ’90s. More than two decades later, he made his highly anticipated return to the SNL stage, this time as the show’s guest host.

Sandler joined SNL in 1990, first as a writer and later becoming a cast member. He left the show after being fired in 1995—and that’s exactly where he picked things up in his opening monologue.

“It broke my heart to pieces, cause SNL was my home. Where can I do my funny voices now? I never felt so alone,” Sandler sang while dipping into his character voice. “NBC said that I was done, then I made over $4 billion at the box office, so I guess you could say I won.”

Chris Rock also made a notable yet brief appearance to sing along, as he too was fired.

Adam Sandler singing about being fired by NBC… one of the best SNL monologues in a long time.

“We were on it for a few years, had our run, and everything happens for a reason. We kind of understood because we did our thing,” Sandler told the Daily Beast in 2014. “It hurt a lot at the time because we were young and didn’t know where we were going, but it all worked out.”

Through his five-year tenure, he solidified his SNL legacy by bringing to life many notable characters, including Opera Man, Canteen Boy, and the Gap Girls.

Many were anticipating an appearance from one of these iconic characters. And they weren’t disappointed: Sandler reprised the role of Opera Man on the Weekend Update segment of the show.

On Thursday, Sandler told Seth Meyers on the Late Night with Seth Meyers that SNL asked him to host the show after the release of his Netflix special, 100% Fresh.

“It was a mistake, they caught me in a weak moment,” he joked about his decision to host the show. “No, those guys are great.”

Sandler ended the show by singing a moving and somber tribute to honor Chris Farley, his late friend and former SNL co-star. The song was featured for the first time on his Netflix special in 2018. Farley died of an overdose in 1997.