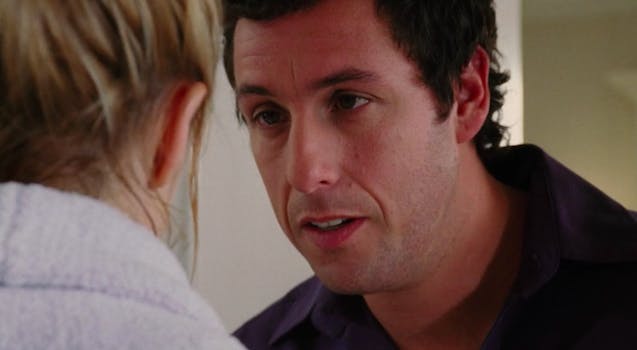 We've all been watching Adam Sandler movies more than we'd like to admit.

Ah yes, Adam Sandler. Either you love him and praise his mainstream (albeit mediocre) comic genius or you’ve inexplicably hated everything he has appeared in since you first laid eyes on Little Nicky. No matter what camp you’re in, there’s no doubt you’ve been watching Adam Sandler on Netflix a lot more than you’d probably admit—especially since he expanded his initial 2014 contract with Netflix to include eight total films.

His Netflix original movie slate has been mostly full of what you’d expect: goofy comedies. 2015’s The Ridiculous 6 and last year’s The Do-Over were objectively not good films, but very digestible and a lovely break from streaming sad Netflix hits and true crime. But Sandler also surprised audiences with more serious hits like The Meyerowitz Stories (New and Selected). And gear up, because this year, Sandler’s 100% Fresh Netflix comedy special is set to debut Oct. 23.

Whether you spent years grappling with your deep, inexplicable attraction to him in Happy Gilmore (???) or you cried real, sad tears watching Click, we’re happy to announce that you can binge these and many more Sandler classics to your heart’s desire. Here’s our complete list of every movie starring Adam Sandler on Netflix.

The very best of Adam Sandler on Netflix

1) The Meyerowitz Stories (New and Selected)

Sandler’s most recent performance in Noah Baumbach’s Netflix film is so good, so lived in and empathetic, that you don’t want the movie to end. Serious Sandler performances are as rare as an Andre 3000 verse, and each one must be savored in kind. As with Punch-Drunk Love, we can only hope this marks a new chapter in Sandler’s career. If it doesn’t, well. Meyerowitz is still great.—Eddie Strait

I’ll always love The Waterboy for one particular joke. There’s a wrestler named Captain Insane-O, and for some reason, that name has kept me giggling for 20 years. The rest of the film has enough laughs, mostly from the visual gag of Sandler destroying people much bigger than him. This is one that always makes me chuckle when I come across it on TV. Maybe one day I’ll stop selling it short.—E.S.

This was always my favorite of Sandler’s early comedies. The Bob Barker fistfight alone puts Happy in the ’90s pantheon. Sandler’s yelling shtick is a comedy crutch and one that is more wobbly than it is a source of laughs. Maybe I was just the right age when I first saw it, but I still laugh a lot and this goofy golf classic.—E.S.

This may be blasphemous to many Sandler fans, but Billy Madison isn’t that funny. The main problem is that Sandler’s screaming-in-place-of-jokes thing is cranked way up. The movie still gets laughs out of Billy and his classmates, but if want angry Sandler, why not watch Happy Gilmore instead?—E.S.

This movie almost deserves to be last on the list for providing the basis for Charlie Sheen’s execrable TV adaptation, but we’ll overlook that for now. Putting Jack Nicholson and Sandler together sounds like a good idea on paper, but the result is too hit-or-miss to call it a success.—E.S.

Starring Adam Sandler as the father of the bride, Kenny, and co-starring Chris Rock as the father of the groom, Kirby, The Week Of chronicles the days leading up to the impending nuptials of their characters’ children and the myriad of problems that arise as their families come together for the ceremony. It isn’t a good movie by any conventional standards, but it manages to clear the very low bar Sandler has set for himself. —Chris Osterndorf

This is the most disappointing of Sandler’s dramatic work. The acting by Sandler, Paz Vega, and Tea Leoni is solid, but James L. Brooks’ script is uneven. In its strongest moments, Spanglish hits on some emotional truths, but there aren’t enough of them to recommend it.—E.S.

More of an afterthought than a movie, the most notable thing about The Ridiculous 6 is that it opened at the same time as The Hateful Eight. A group of six diverse people gets together to spew their venom, but this movie ain’t written by Quentin Tarantino, and it’s as offensive as you would expect.—E.S.

This Netflix original is nothing more than an homage to Sandler’s real-life manager, so it’s kind of interesting from that angle. It has heart, which automatically puts it above the other Sandler-Netflix offerings.—E.S.

The thing that irritates me the most about Click is how emotionally phony the movie feels. The idea of a man with a universal remote control (that controls the universe!) is fertile terrain, but Click razes it and plants obvious, first-draft jokes instead of something more fruitful.—E.S.

The Cobbler is a disaster of such epic proportions that it could only come from people with the best intentions. In fact, we’ve included it on our list of the worst Netflix movies. Academy Award winner Tom McCarthy cooked up a film about a cobbler (played by Sandler) who makes magical shoes. It sounds like a movie pitch courtesy of The Onion, but lucky for us, it’s a real thing.—E.S.

For anyone who has ever dreamed of faking their death or abandoning their responsibilities to start anew, The Do-Over is for you. Sandler and David Spade play guys who decide to abandon their current lives, only to assume the identities of criminals. Yikes! They shoot and joke their way through the haphazard script, and before you know it two hours have passed and you’ll be wishing you were someone else.—E.S.