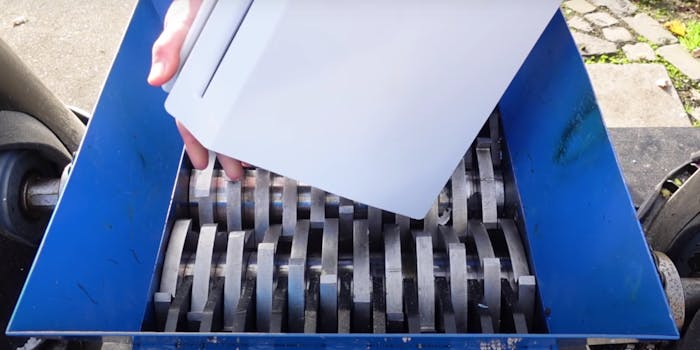 The YouTuber wanted to 'see what's inside.'

From scalpers selling them at inflated prices to WorldStar-esque Walmart brawls and viral confrontations, the PlayStation 5 is causing a frenzy among people who just want to get their hands on one of the coveted next-gen consoles.

So when a YouTuber decided to put one through a shredder to “see what’s inside,” it didn’t really go over well.

YouTuber Captain Crunch Experiment, who boasts over 29,000 subscribers on the platform, destroyed the PS5 via an industrial shredder as an “experiment.”

“In this video I’m shredding and destroying the all new Sony Playstation 5 , the ps5 controller , the power cables , books and also shredding the boxes it comes in. So you can see what’s inside a PlayStation 5,” the YouTuber wrote in the video’s description.

Part of the caption reads, “Fast Shredder vs Sony PS5.” And while the PS5 didn’t win, it, as one viewer noted, “fought back bravely.”

Viewers were less than impressed with the so-called experiment.

“I’ve got a PS5 but this makes me angry that someone could have played it instead of just shredding it,” one commenter wrote.

“Imagine this was the guy in front of you who got the last one in stock,” another joked.

The negative feedback is apparently doing little to deter Captain Crunch, who is already plotting their next “experiment.” “If this post gets 100 likes i’m shredding a Xbox X!!!” they wrote on the video’s pinned comment.